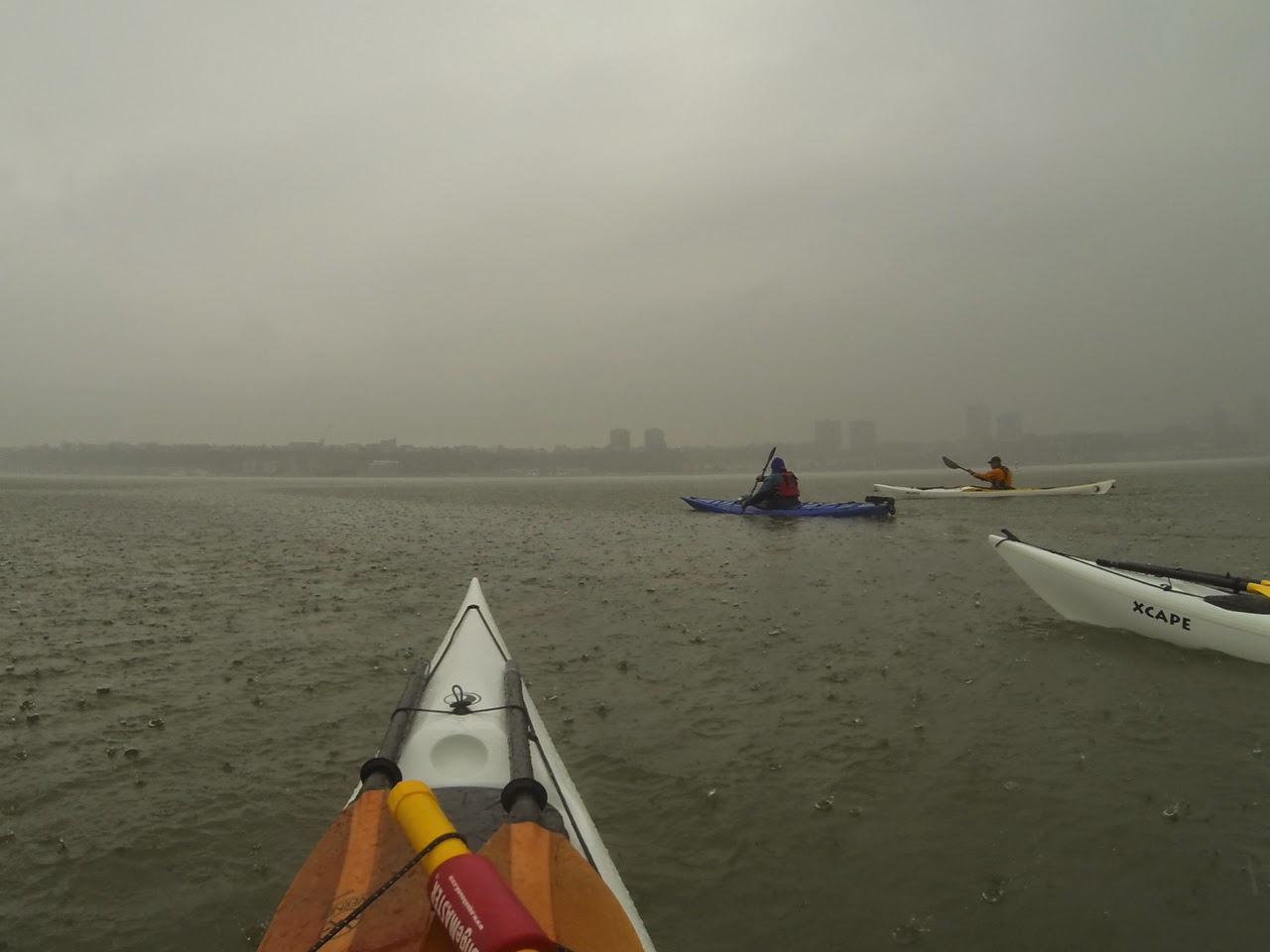 It was cloudy, nothing but clouds overhead, with predictions of 100% rain in the afternoon. “Cats and Dogs,” said the trip leader, “this afternoon all hell will break loose.” We planned to be back before then. With almost no wind, today was going to be a good day for a trip north, practicing skills along the way. This was a trip out from the shop at Pier 40, with two clients and three coaches.

We left about two and a half hours after high tide at the Battery, meaning we’d have mostly slack on the way up – a good way to gauge un-assisted speed of our students.

Paddling north was fairly uneventful; it may not have looked like it but it was a brilliant day. With almost no wind, and little traffic, we could practice some of the more fiddly stokes, like hanging draws and draws on-the-move.  Our clients worked on edging and bow rudders.

It was a relatively warm day for winter – air temperatures in the high 40s. The water temperature was 47 – cold, but not terrible to touch.

Nonetheless, we did not see a lot of riverfront pedestrian traffic, just a couple of fishermen.

On the calendar this was a trip to the Intrepid, NYC’s retired aircraft that is now an “air/sea/space museum”. The giant box on the deck is temporary cover for a space shuttle. I made my usual joke about it being the one with low miles.

Since our group was doing well speed-wise, we pressed on to Pier 96, only a few blocks further north, past the cruise ship terminals.

We sipped some water and took in the view before deciding to head back. By the time we were heading out, a thick fog had rolled in, and those with lights switched them on.

Then came the rain.

It came hard, pelting our boats and even the water rather loudly. I pulled up the brimmed hood of my drysuit. The rain wasn’t bad; wind would have been worse. It lasted about ten minutes, and both the rain and the fog rolled away by the time we were past the Intrepid.

On the way back we had our students practice edging, using edging to help steer their boats. One of them had a habit of stern rudders to keep straight, and the other would do a sort of reverse-sweep/pry move that just completely killed momentum. Edging is a great way to make course corrections on the move, while still propelling the boat forward.

Actually, edging is good for a lot of things. That is just one of them.

When we got back to the Pier 40 embayment, we didn’t go straight in. These guys are signed up for a rescue class later this winter, so we’re taking as many opportunities as we can to let them practice. That requires a victim, and so the trip leader (who is also the head coach) asked me if I was prepared to get wet.

Well, I had been on the fence about attempting a roll, but sure, this cinched it.

We picked a rescuer, and I did a roll. The water was noticeably cold, and when I came up, I needed a moment to let the ice-headache effect wear off. It’s only going to get colder, and I have a goal of rolling in the Hudson at least once a month this year. I’m building up a tolerance.

With that out of the way, I capsized and exited the boat. My rescuer came over and performed a pretty decent rescue, talking me through a heel-hook. At one point, hanging on to the stern of his boat, I made a semi-faux grimace at the cold to one of the other coaches, but indicated I was OK. I have learned that it’s better to float my entire body on the surface. Among other things, the water is warmer than five feet below!

After talking though improvements he needed for the rescue, we had that student go in and the other rescue him. The main note for both was paddle management, and also boat control – using deck lines to dump, right, and put the boat where it needs to be for the rescue as quickly as possible.

I’ll tell you, speed is key when the water is cold. Brrrr!

I went in one more time for the lead instructor to demonstrate a good rescue. After that, we were done – a good thing because I was ready for hot tea.