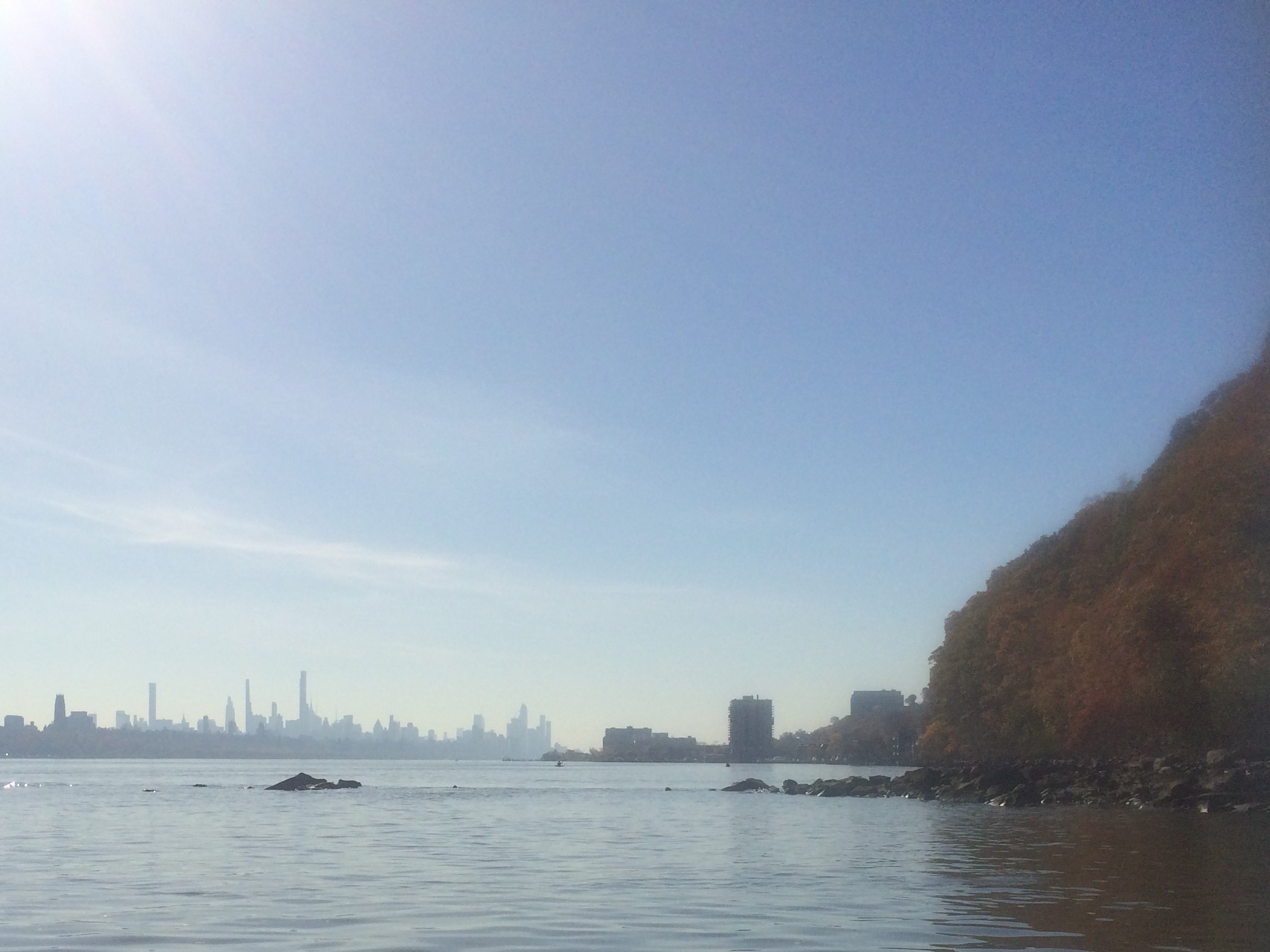 I was happy on Saturday, November 7, to paddle with seven other members of my club. It started small, with about three people posting online that they would go for a paddle together. I opted in, as did others, until altogether we were eight, seasoned members and new members, all heading out on an unusually warm (70s F) day at the end of the first week of November.

Across the water, the Palisades were a bloom of warm autumnal colors. There was very little wind, and the sun was out shining. It was going to be a beautiful day for a paddle.

To foster a sense of independence, some of us who are more experienced encourage new paddlers to look up the weather and conditions and propose their own plan. That was exactly what KW had done, and the two paddlers who initially suggested the trip laid out their ideas: paddle south, then come back.

Tidal conditions being what they were, the current would begin to flood to the north around the time we would leave. We didn’t expect to get far, but we talked about strategies for mitigating the effect; chiefly, eddy-hopping. In the briefing, we talked about what that meant, and on the water, we told everyone to aim off a bit so as to ferry across the river.

We crossed the river – nearly a mile wide at this point – without incident, and began paddling along the shore. A park trail runs alongside, so we had plenty of scenery to view and humans to wave at.

We paddled south a bit. We’d been out less than an hour, so it seemed we would continue paddling below the George Washington Bridge, along the coast of Fort Lee.

A bit further south, several waterfront houses line the shore; a few must have been damaged in superstorms like Irene and Sandy, but still they stand, affording views of Manhattan and the river that separates it from the mainland.

As we paddled by, close and noodling around some docks and platforms, a woman stepped out on her porch to proclaim, “Biden won!” This was a few days after the election in the United States, and it seemed enough votes had been tallied for at least one network to call the election in favor of the Democrat, Joe Biden.

Of course, the tallies weren’t all complete, and there were (and still are, as of this writing) legal challenges. That said, the outcome seems to be holding.

We came across some fellow-travelers; I have to say, it was the most active recreational boating I’ve ever seen on the Hudson at this time of year. As we paddled away from the houses, we met and chatted with two people paddling outrigger canoes, having come up from Hoboken Cove Boathouse.

Some of us paddled into a marina that is home to the North Hudson Yacht Club; many boats were out of the water, and none were preparing to sail or motor. I took pictures of some small tugs tired up in the marina. One had a name, the other, just a serial number for a name.

Around this time, we started to look at the time. We’d actually come quite a distance, and the group showed no signs of slowing down. I was beginning to wonder if anyone was actively making decisions about when to turn around. I wasn’t worried though – it was a nice day, and I didn’t have anywhere I needed to be soon.

In fact, we weren’t far from Mitsuwa market, an Asian supermarket with a food court. It’s about four nautical miles from the boathouse, and we were less than a mile away; on the other hand, we were approaching the maximum flood rate of the river, so it’d be a bit of work to get there, and we’d have a narrow window to return before losing current.

A few people did have places to be, and ultimately, we split into two groups of four. I stayed with the Mitsuwa group, while the others headed back.

We paddled on a ways, passing this enormous flag, lifted from its doldrums by a brief puff of wind.

We eventually arrived at Mitsuwa, muddling through a tricky landing as wake washed over old pilings near the beach. The team got out, and two managed to get in and out of the store in about forty minutes, wolfing down a a lunch and stuffing some shopping into their boats.

I enjoyed half a peanut butter sandwich and an energy bar, as well as some coffee cake that another paddler brought. It was quite filling.

Sated and hydrated, we set out for home. We saw another group of paddlers arriving from the south – probably a tour group from Manhattan Kayak Company.

Like I said, it was a pretty active day for recreational boating.

So there you have it: an accidental grocery run. We set out for an easy-peasy journey to nowhere, and wound up paddling four miles and buying groceries.

I didn’t take many pictures on the way back, but it was hardly uneventful. In the middle of the river, the water was sparking with jumping fish. Looking like rain in the distance, up close we could make out their fins and see them popping out of the water.

While I was hoping for a more exciting cause, we were later told that they were fleeing the big-mouthed bass in the river. It didn’t help the fish that seagulls noticed the commotion, and came in for a bit of lunch. There were also fisherman closing in for a piece of the action.

After we passed north of the bridge, we saw the club’s Commodore and family friends out paddling. We said hello, and kept on our way, all arriving back at more or less the same time. Some of our earlier party were still there. It was a much shorter trip back than on the way out!

Paddling with acquaintances, enjoying the paddle with people you know well and people you don’t know well, is always a pleasant treat.

Earlier this fall I delivered some courses, including assessments for both beginners and intermediates, and then took a four-day training course for myself in Maine. It’s easy to get lost in the world of requirements and assessments; it was nice to get back to just paddling for fun.