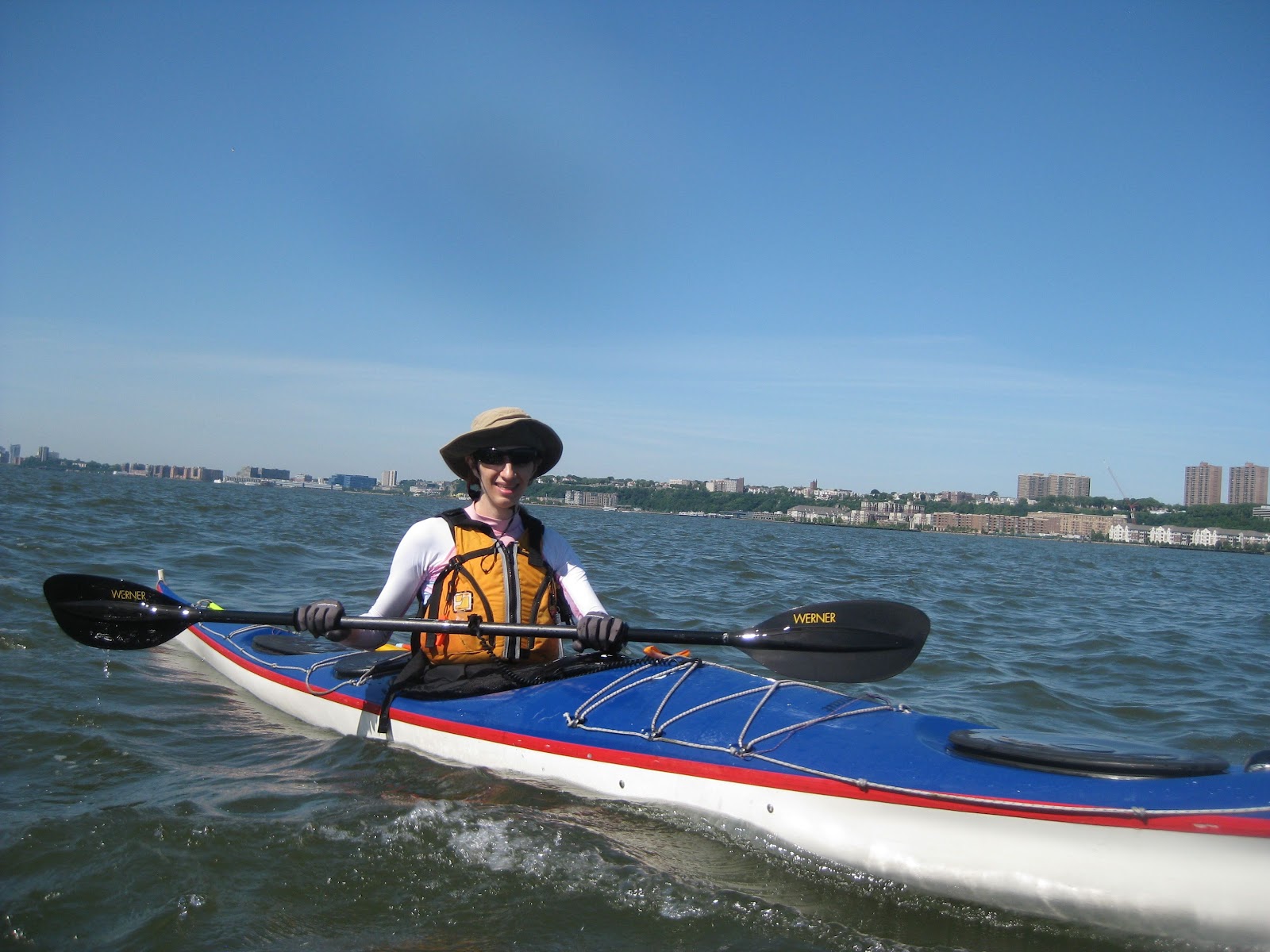 On Saturday I took a short trip with MG, another volunteer at the Downtown Boathouse. He has a folding boat, one that, admittedly, he does not fold much. We decided to meet up earlier rather than later, in order to catch some current north before it petered out and turned south.

We left shortly after the public trip had set out. Our original plan was to go over to New Jersey and pass them, and basically chart our own course in parallel to them, but a steady breeze from the north made paddling north a bit of a challenge. We also wondered if the current had changed early, or that we were in slack at the least. By the time we reached the 79th Street Boat Basin, just 20 blocks from where we started, we found we would drift backwards if we stopped paddling.

At the marina, we admired this pretty ship, the Avalon.

MG took my picture. We’d traded cameras – me with his, he with mine – so we’d have pictures of ourselves on our own cameras. So narcissistic!

Up in the mooring fields north of the marina, we stopped and said hello to a couple of families who had sailed to NYC. The first (not pictured) was a French family taking two years off to sail. They had come here from France in their ship. At least, that’s what they told us.

We caught up with the public trip, and paddled with them for a while. We couldn’t resist helping out, or giving pointers. We caught up with a mutual friend who was paddling with the trip. At one point, the assistant who was in the lead asked me to check on an orange boat coming up in our rear view. Turns out she was a paddler named Fiona, furiously flying up the river in an orange boat with a white strip drawn at an angle. She passed us and disappeared into the distance up ahead. “Definitely not one of ours,” we concluded.

The second vessel, pictured here, was a catamaran flying the German flag. This man said he and his family had taken four years off in order to sail around the world. I asked about the Euro 2012 (football, not the currency) and he said he didn’t really follow it. A German man who does not follow Foosball? Shocking!

In both cases, MG congratulated them on not having to go into an office job every day.

By this point, we were ready to go back. We knew the tide would turn soon, and we weren’t going to get anywhere interesting before we’d have to turn around with the current anyway.

Going back was much easier. With the current, we practically did not have to paddle at all. We could have stern-ruddered the whole way back. Instead, we stopped in at 72nd street, and then paddled under Pier I and past the old rail-transfer terminal. I took MG’s picture here.

Back at the boathouse, I took some time to go over the Argonaut again. Mostly I was re-packing some new gear I bought, stringing lights and tying things down with some line. In any case, before we went in, MG got some nice shots of the Argonaut in profile.