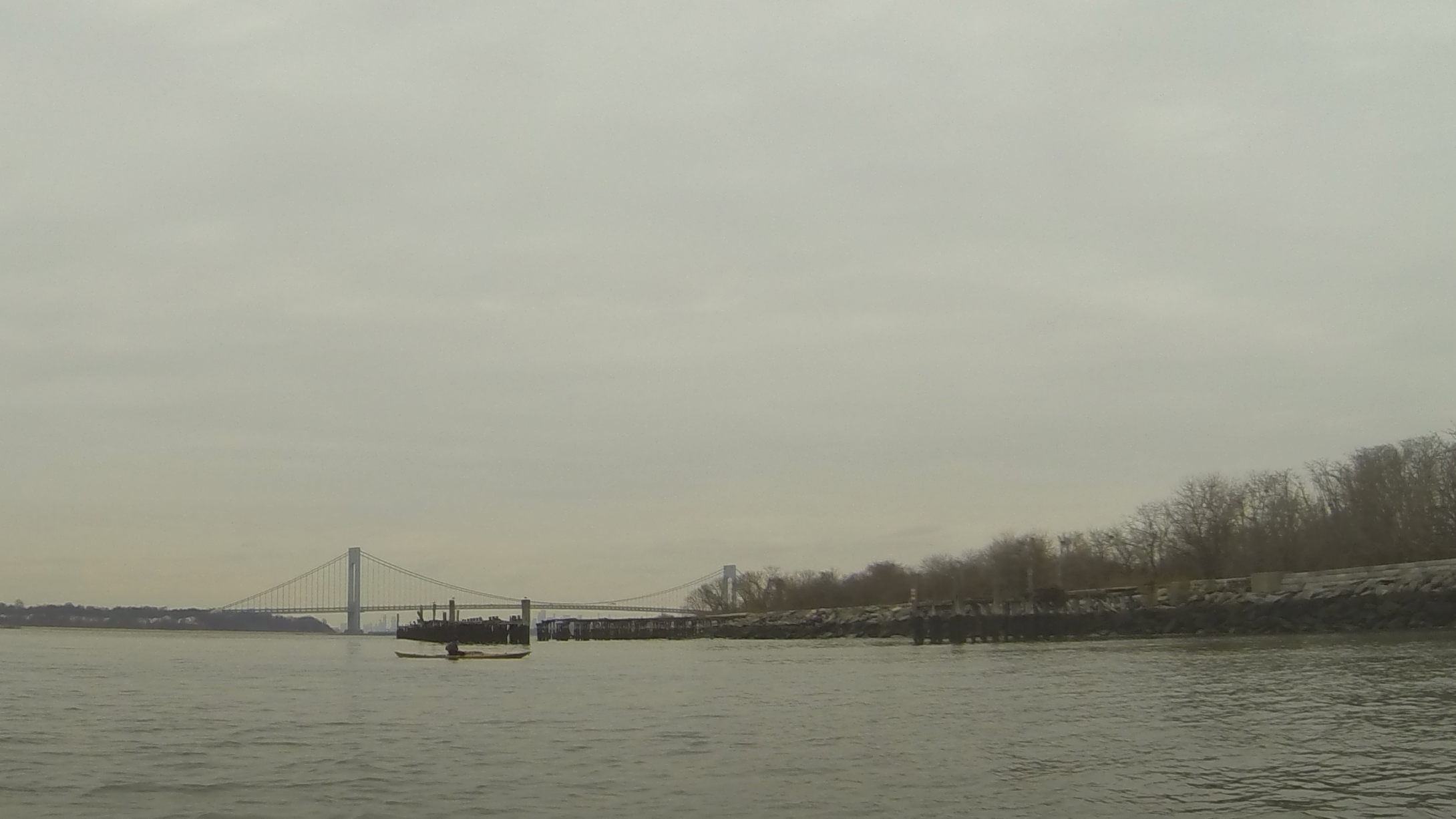 The weather prognosis was grim. All over the news, and in office discussions, a winter storm that had hammered the Midwest was predicted to hit the East Coast on the weekend. High winds, freezing rain, and eventually a dump of snow were expected, prompting travel advisories and endless stories about cars skidding off the road due to black ice.

After a few checks of the weather, I, along with a couple of friends from the Inwood Canoe Club, decided to drive down to Staten Island and put to sea, looking for seals, and maybe paddling out to a lighthouse.

I’ve been down here a couple of times before in the winter. The two most immediate areas to see are Hoffman and Swinburne Islands, approximately 1nm and 2nm respectively south of the Verrazzano Bridge. These are artificial islands with long, somewhat sad histories. These days, they’re nature sanctuaries, meaning you can’t land on them. In the winter, harbor seals like to hang out on Swinburne.

You can read a mid-century New York Times article on the islands here.

What I like about the lower harbor in general is that it is so open. Below the Narrows, the harbor widens greatly, and it’s just a few miles to the open sea. Cargo vessels and container ships come from far away, following the line of the Ambrose Channel. Looking southeast, the horizon is endless; look north, or east, or west, and there’s enough of New York City to remind you that home is not so very far from the boundless ocean.

Hoffman is the closer and larger of the two islands. Like its smaller sibling, it was used at various points as an overcrowded quarantine station, marine merchant training center, and anchorage for antisubmarine nets in World War Two. Many of the pilings supporting the old dock are still visible, and a solid-looking seawall skirts the island as well.

Swinburne, about a third the size of Hoffman, was used for the same purposes. A lone chimney remains from what may have been a crematorium for the quarantine patients who didn’t make it off the island. There is some human-construction detritus here as well, but the shoreline is just rocks, and it’s here that the seals like to congregate.

SL, one of my companions, spotted them first, a whole cascade of seals sliding off the rocks as we approached. He later described the babies tumbling much less gracefully into the water. Certainly, by the time I saw any, they were all in the water.

Seals tend to behave like prairie dogs. They keep their distance, but are curious about these narrow, plastic-and-fiberglass interlopers. They will pop their heads out of the water, then drop down, sometimes with a splash.

I’ll be honest, my companions got the best photos. These are the best I can away with.

After playing hide-and-seek, peekaboo, and so on with the seals, we paddled closer to Swinburne and have a little snack.

Then we circumnavigated the island, which took all of ten minutes.

Our next decision was a bit of a big one. The tidal current would continue running out for another three hours. However, the waters between Staten Island and the Ambrose Channel form a bit of an eddy, and in any case, there wasn’t much of particular interest in any direction but south, at least not that we could reach and return from with the time we’d allowed ourselves. We decided to head south towards West Bank Light, about 2nm away, and just be resigned to a slow paddle back.

The wind had picked up a bit, and as we paddled, we were more exposed to open water. We saw 1- and 2- foot waves, and at the lighthouse, kept in the lee while we took a break.

When we turned to leave, we saw a lone seal had followed us out.

To our surprise, we made slightly better time on the return paddle than in heading out. The seals had dispersed, so with a more relaxing pace, we headed back to the beach.

With our hands wet and a bit of breeze, our hands were numb until we got gloves on. We finished unpacking and loading, then headed back to Inwood.