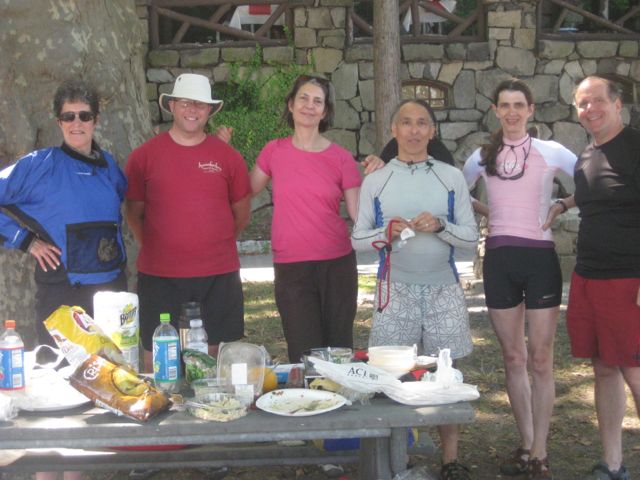 One of my goals has been to paddle north past Manhattan. Typical destinations include Yonkers, or Alpine, which is essentially a state park on the western side of the river, across the river from Yonkers. I planned a trip and invited some friends, and up the river we went on Saturday July 21.

This was a two-stage trip. I departed Pier 96 with two people, and we paddled north to Inwood, where we meet two other paddlers, one of whom was in a canoe. Fromm Pier 96 came MD, and VS, the latter having joined me on the trip to Staten Island last month, and in Inwood we were joined by AW and MH, the latter in his canoe.

The first thing to realize is that getting to Inwood alone is a journey, at least ten miles from Pier 96. With current, and taking time for conversation, we got there in about two hours. VS gets extra credit for paddling up from Pier 66 earlier.

We kept on the Manhattan side since we were going to Inwood. We went out around the sanitation pier, past 72nd, past the marina and its mooring field, and plowed through some fun little waves. The wind was coming directly against the current, so it was just bumpy enough to be fun.

We stopped at Fairway on the way up – not getting out, just taking a break for water. A water main was spewing water into the river, but then shut off. We weren’t sure what that was about.

MD tried out his Greenland-style paddle. These are long sticks, usually made of wood, very narrow but supposedly providing the same surface area as modern paddles. I’d love to have one someday; MD has let me try his in the past, and it’s a different paddling style. He wanted to see if he could use it as his primary paddle (it worked very well, I should say).

In Inwood, we were passed by a barge; the photo is a bit blurry but you can still see it. Barges are majestic, large, steadily-moving big beasts of burden on the river. They’re easy to avoid – and you should – but beautiful to watch.

After picking up AW and MH, we set out, and in short order we were in territory I have not visited: we had passed the Harlem River and were paddling along the Bronx, where we lined up and crossed the river.

It’s hard to describe how beautiful the Palisades are. They’re majestic – tall cliffs rising out of and looming over the river. They’re green, covered in trees, with footpaths along the base; we could sometimes see hikers along the trail. It was hard to believe we were just a two or three hour paddle away from the city, easy distance from the largest and fourth-largest cities in New York State.

As we approached Alpine, we began to run out of current, and the last few miles were hot, tiring, and we were hungry. When we finally landed at a beach on the north end of the marina there, we quickly hopped out, pulled up our boats, and unpacked our picnic.

We also ran into CL and R, who had also set out for the same destination independently. In this photo are AW, MH, VS, MD, myself, and R. CL took the photo.

What a spread it was! I brought bratwurst, rolls, and mustard, as well as chips and soda and pie; MD brought hummus and tabuli; MH and AW both brought pasta and cookies. We ate our fill. We had more than enough food because some folks had backed out at the last minute.  It was grand.

We waited for the tide to change; some folks paddled north to see what was around the bend. We were running late, so we couldn’t stay quite as long as we had hoped – while the tides favored us going back, for those going back to 96, to stay too long would have put us at a disadvantage at the end. So, we left around 430, with almost no traffic, and a glassy river glistening in the sun.

On our way back, we passed the Harlem River again, with the Henry Hudson Bridge arcing high over it, a little railroad bridge below it.

From a distance, we could see Manhattan, the George Washington Bridge hanging in front of it, clouds passing by, so disparate we could see different weather patterns over different parts of the city.

I have to say this is what I love about kayaking, and the city as well – to have such great distance, and such enormous scale and scope of human activity, contrasted with natural beauty and an intimacy with nature that rivals the state parks of the west. We went somewhere under out own power, enjoyed good company and food, and returned.

On the way back, wind once again prevailed against the current, kicking up sizable waves that were fun to surf. For about 45 minutes we were paddling in 2-foot or 3-foot troughs, rising up, punching through them, steadying with a brace, carried by the current.