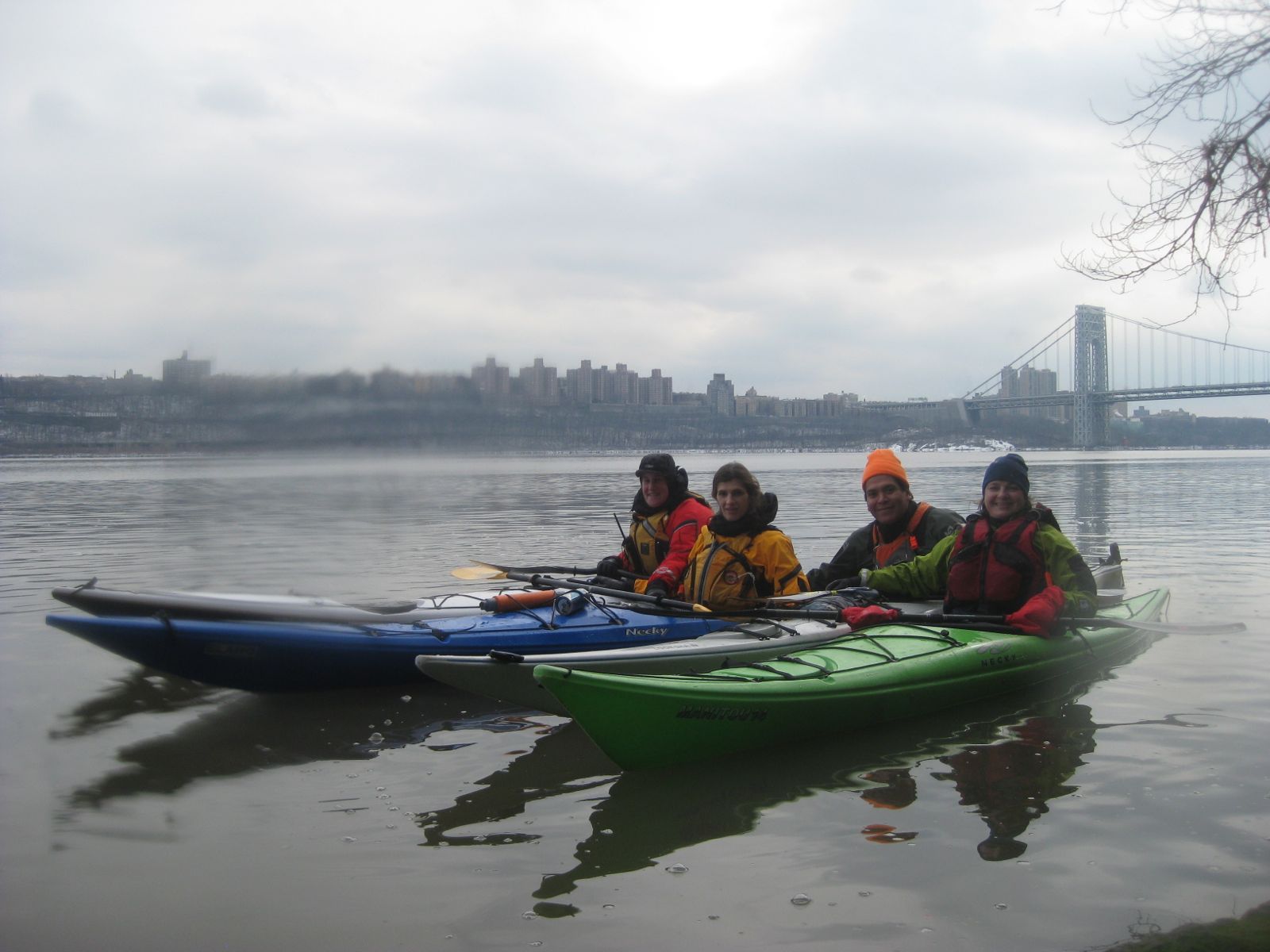 My fingers are cold, and my toes are numb. I haven’t even gotten into the boat yet.

Air temperature is 25 F, and the water about 10 miles south at the Battery, is 39.2 F. A light powder of snow covers the ground. Across the river, the Palisades would be gleaming, if this cloudy overcast would stop blocking the sun.

I’ve been out a few times in what I used to refer to as the off-season. Normally, kayaking season in NYC runs from mid-May to late October at most, relying on jackets and layers at the front and back of the season. Beyond those limits, the water temperature is low enough to warrant a wet suit, and eventually a drysuit. I bought a dry suit about three month ago and have been out a few times, to the south, to the north, and into the Harlem river.

However, the weather has been unusually warm. Not warm in an absolute sense, but for December and February, relatively warm. The air temperature at times has been in the forties and fifties, and until this past weekend, hardly any snow to speak of. And so, finally, we had a cold snap and precipitation, and I was able to get out and paddle in a somewhat wintry wonderland with some friends.

We started out at the Inwood Canoe Club. I paddled with three compatriots, AA and AW, who are members, and a mutual friend MB, who is considering membership. I was the first to arrive and behold the unsullied layer of snow on our road and our dock. Lumber for repair and saddles for cleaning the boats had been left out. To the south was the George Washington Bridge, a familiar, if chillier sight.

After paddling down and across the river, I grabbed some snaps of the New Jersey skyline. We had paddled south along the Manhattan side, under the GWB, and were coming just short of Riverbank Park. We had a decision to make – would we cross, or not? We were on a somewhat limited schedule, but with this group, the real question would be: why wouldn’t you cross? We crossed the Hudson diagonally, from about 145th street to about 135th street.

I miss my boat. I miss the Argonaut, and its rugged, steady, Crown Victoria frame. Except for AW, we were all in plastic club boats, AA in a Necky Looksha IV and MB in a Necky Manitou. I paddled a new addition to our fleet, a plastic Necky Elaho with an aluminum drop-skeg. Hard-chined, it proved stable but tricky to track. I used a lot of rudder and sweep strokes.

We stopped to take pictures.

We paddled on to a now-familiar sight: the Ferryboat Binghamton. If we’d had more time we might have gone on down to Mitsuwa and landed for soup and tea and what have you. This is a route I’ve run more than a couple of times now and I’m pretty comfortable with it. I think it’d be interesting to bring others along to see this landmark ferryboat, at least until it is demolished and towed away.

We took a break – water, conversation, granola bars. As cold as it was, when paddling, one builds up body heat, and that body heat gets retained. Once we stopped, it seeped out. A key to winter paddling is to keep moving, because otherwise you won’t replace precious body heat. After some rest, we headed back up on the New Jersey side of the river.

We were closer to the shore as we paddled up, so I tried to take more pictures. I really wanted to capture the snow on the ground, as if I needed proof of winter paddling. It wasn’t thick, but it was everywhere. In the photo above, it coated the rocks that protected the shore against the water.

As we paddled back, the wind kicked up a bit in our face. It was nothing insurmountable, but it made me pull up the hood on my drysuit, and burrow into the wind. Fortunately, the current started to turn, so we ha a little of that with us.

When I show these pictures to fellow New Yorkers, the most common response I get is “you’re crazy”, for braving either wintery temps or waterborne pollutants. The next response, however, is more telling: “I had no idea it was so beautiful.” Especially from Upper Manhattan, with the Palisades, it’s easy to forget we’re in one of the largest metropolitan areas in the US.

After paddling under the GWB, we came up to Ross Dock, a large square-ish park at the bottom of he Palisades. It’s a good place to hide from the current, if needed, and in warmer days, plenty of parties and tourists admire the view. On this day, it was empty.

I was thinking we should get a group photo when we got back, but then MB suggested enlisted a running couple on the trail. They were out with their dog. Sure enough they obliged, and I paddled up to hand over my camera. The husband braved slippery rocks and caught this nice shot of the four of us, with Manhattan, and the GWB, in the background.

Much later, we were visited by C, a paddleboarder who was acquaintances with MB and AW. We’d seen him paddling up earlier with the current. As badd-ass as any of us might have felt, seeing a man stand on a board in the open river was pretty inspiring.

He was wearing a drysuit, and head protection, and attached to his board by a cable. That said, the nice thing about sitting in a kayak is the lower wind profile. My legs might have have been a layer of plastic away from water but at least they were covered !

It was a great paddle. Wind, as predicted, was low; while the temperature was low as well, a few layers of wool and some robust paddling kept us all warm. Altogether we paddled nearly nine miles – not bad for an impromptu mid-winter paddle.