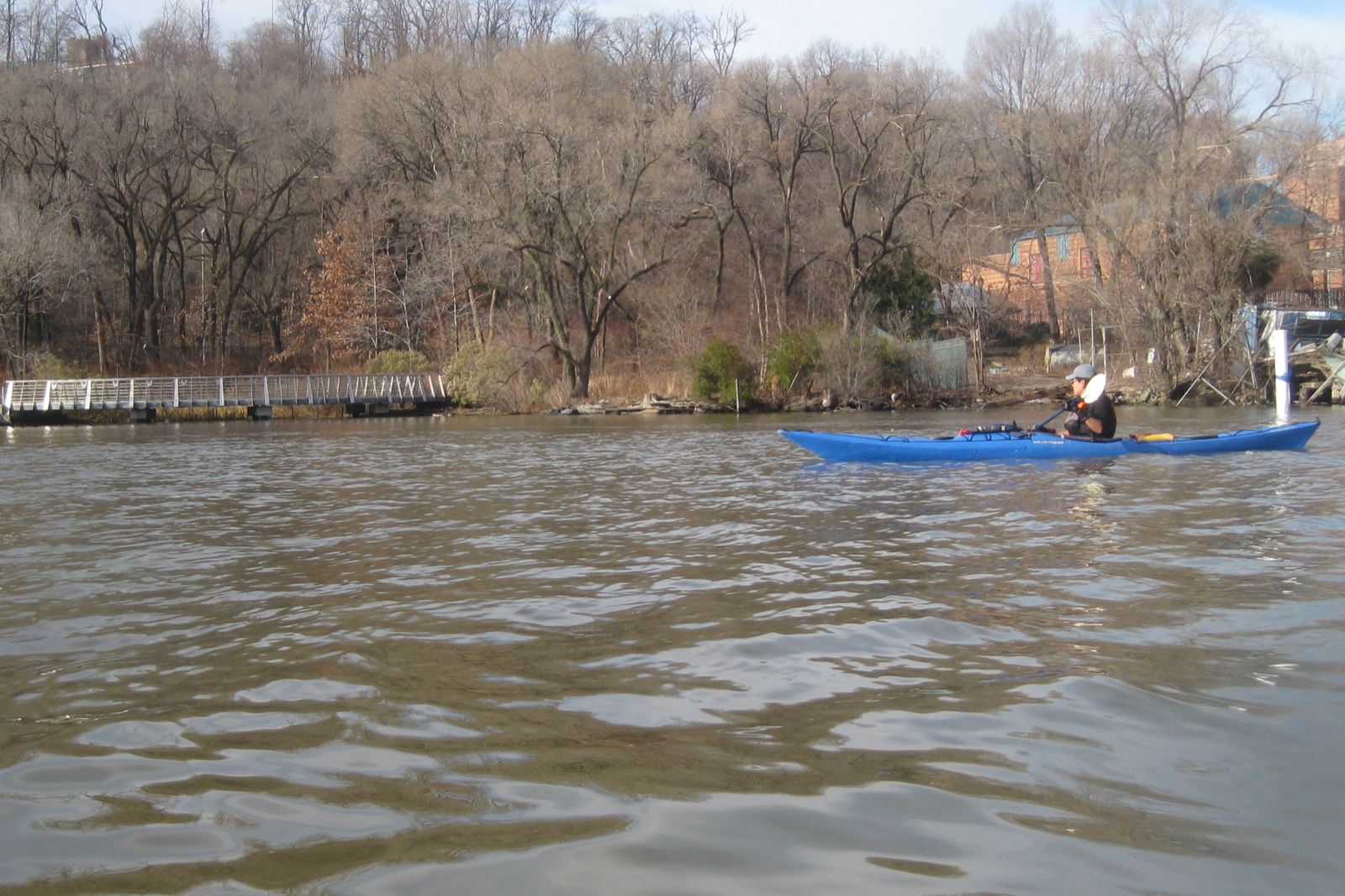 It’s a sign of my non-kayaking life that I haven’t blogged about last week’s paddle, and so I’ll describe it briefly before diving into yesterday’s. In both cases, these have been my first drysuit paddles. While the air temperature hasn’t been too terrible, the water temperature has officially fallen below 50 degrees Fahrenheit, making the protection of a drysuit a necessity.

Last weekend – the 8th – I went to the Inwood Canoe Club intending to work on a boat I’ve been repairing, and then to go for a paddle. As it happened, I ran in to one of the club officers, KM, who was heading out for a paddle. I reversed my plans, paddling with him before coming back to work on the boat.

The current was near max ebb as we headed north, making for a hard paddle up the river. Wind was coming from the west, so as we made the turn to go into Spuyten Duyvil, there were some squirrelly currents to deal with. Once we were in the Harlem River, however, both the wind and current died down a bit, and we had an easier time. We made it as far as the Broadway Bridge before turning around and heading back – much easier as we drifted back with the current.

Yesterday, I went out with AA, another friend from the club. We timed our trip with the current, riding up the Hudson quickly and into the Harlem.

As we came up by Peter Sharp, we took in the coastline. Accustomed to spring and summer, the most noticeable difference is that with a lack of foliage, much more is visible.

We decided to keep on, heading for the three bridges of Hamilton, Washington, and High Bridge. As we approached, the current abruptly changed, and we only made it to the first of these bridges before deciding to turn back.

Earlier, we realized we had not seen anyone else on the water – including motorized vessels. That changed as one of the Classic Harbor Line vessels (the Manhattan) approached and passed us by.

We paddled back and landed at the beach near Peter Sharp, aka Swindlers Cove. We took an extended break, used the local facilities, took pictures, talked about things going on in the club. We watched the tide drain out, leaving our boats high and dry. We hopped in and paddled around, stopping in a nearby marsh area first.

I like to chase wildlife. Geese are pretty patient; Mallards will take flight at a greater distance. Whatever these birds were, they allowed me to tail them, riding in their wake.

Generally, conditions in both the Harlem and the Hudson were very calm. With slow current, the water became glass-like, lending itself to plenty of reflective images such as this.

As we went back, I snapped this shot of the Spuyten Duyvil railroad bridge. We watched it change from being closed to open, to closed again, locking into place with a distinctive sound.

And that was our trip. The current had tuned while we were out, making for a much easier trip on the way back.

I’ll write in more detail about the drysuit separately, but generally, it works really well – though I haven’t put it through trials yet. I do tend to retain a lot of heat, and need to adjust my layering underneath, and I’m still perfecting my acrobatic routine for donning and exiting the suit. However, it isn’t hard to paddle in, and I’m looking forward to more paddling further into the winter season.