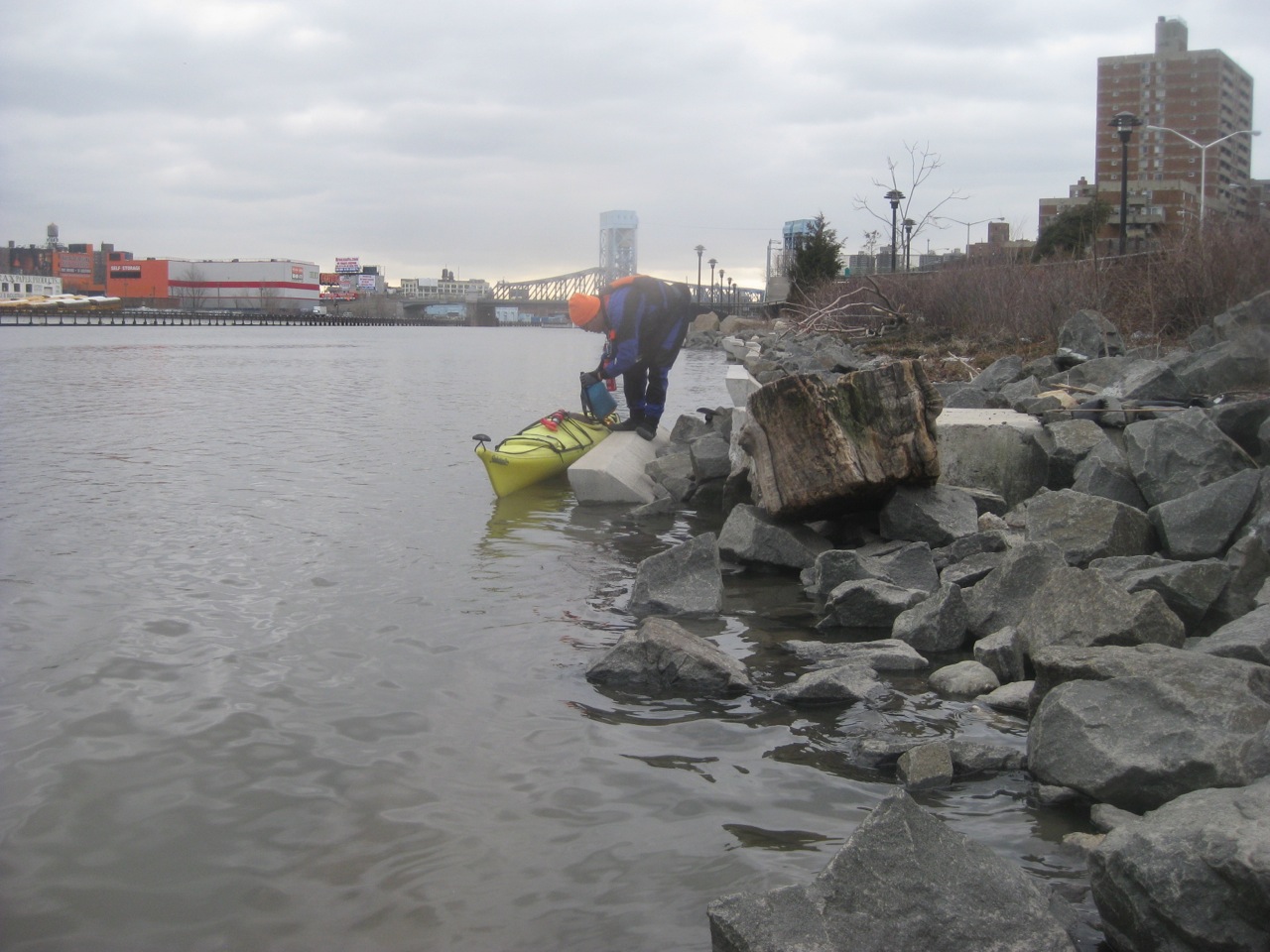 I was fortunate to get out on the water today with at least one paddling partner. AA has been with me on a few trips, but none of our other regulars could make it, so it was just us. We paddled from Inwood Canoe Club to about 145th street in Harlem, had lunch, and returned.

Earlier, we had hoped to hook up with friends who were launching out of Yonkers, but they were starting later, and one of us had to be back by mid-afternoon to go to work. So, we opted to explore the Harlem, which is an under-documented waterway as far as I can tell. There isn’t a lot of tidal data, and no one I have talked to fully understands how the Hudson and East river tidal cycles affect the Harlem. What does “ebb” and “flood” mean to a river that essentially connects two other rivers sideways? The Harlem is like the horizontal line in the letter H.

The sun was exposed for a bit, and we slowed down to consider changing clothes – not an easy task when sealed up in a drysuit. We were both overheating, and the exertion from paddling made us sweaty and tired. We ultimately decided not to change, for the sake of convenience, and as the sun went away, we were oddly more comfortable.

We set out about an hour and a half before max flood on the Hudson. We kept an eye on the time and conditions as we went. Sure enough, the flooding current from the Hudson propelled us down the Harlem once we made it past Spuyten Duyvil. In twenty minutes we were at Inwood Hill Park, and twenty minutes later, pulling up to Peter Sharp, where we saw these treasure hunters on the shore.

They had a metal detector. Their dog didn’t seem to know what to make of us – half-human, half-floating log. He was friendly though, if perplexed.

Along the way we had passed some crew boats. Some little kids (as in elementary school age) were in the coxswain positions, so my guess is it was an alumni event or community thing. We were also passed by a NYPD boat, towing another NYPD boat against its side. We got a slight wave out of that.

We kept on, under the High, Hamilton, and Washington bridges. We could make out Yankee Stadium on our left, as well as the Lighthouse publishing company’s building, with its faux-lighthouse on top. In this part of the river, there aren’t many places for a kayak to stop. On the left are pilings protected by rubber tires, and a highway overpass that a kayak might be able to limbo under at a lower tide. We had a lot of current though, and figured we’d take our chances finding a spot downstream.

As we passed below Macombs Dam Bridge, we started to think about where to stop and eat. The trick would be to wait for the current to change. As fast as we were moving, we didn’t want to fight it on the way back!

There weren’t any great places to land though. As we peered down the river, the Bronx side was covered with these crazy tire pilings, and the Manhattan side was all concrete wall shoring up the Harlem River Drive – but then we spotted a walking trail, and below it, some crumbling rocks.

Now, when we landed, the ledge that is visible in the photo above was nearly a foot above the water. It formed a perfect little concrete mini-dock to step out onto. We pulled our plastic boats up and out onto the large rocks that led away from the edge, which you can see below. In the forty-five minutes or so that we spent stopped for lunch, the water came up that high – and this is on a normal day, without any storm surge.

By now, we were glad we’d kept layers on underneath our drysuits. The sun had disappeared, and we’d been paddling cold for a while. We were not getting much wind, so our hands weren’t numb, but the air temperature was still in the high thirties, making us glad god our warm layers underneath.

In order to launch, we ended up walking out boats back about fifty feet, stepping carefully on the rocks and leading our boats by their carrying handles, with one end in the water. Here, AA gets ready to launch from another ledge that wasn’t underwater.

In any case, we had a reference now: we had departed at about 1.5 hours before max flood at Edgewater, and it had taken us just about an hour and a half to get to where we landed. Based on that, I think it’s reasonable to assume that departing at the same time relative to the tides would get us to 125th street, or the northwest corner of Randalls Island, easily, possibly as far as Hell Gate. An earlier departure would give us loiter time near Hell Gate, or carry us out into the East River between Queens and the Bronx.

As we paddled back, there was some current against us, but it was not too bad. We stayed near the wall on the Manhattan side. We spotted a lot of little nooks and crannies that we thought would merit further exploration – on the land, but accessible only by water. We joked about CHUD.

I missed a great shot of High Bridge, but got the above shot instead.

As we paddled, the current lessened, and paddling got progressively easier. By the time we got to Peter Sharp Boathouse, it was “normal” paddling – no extra effort at all. We didn’t see anyone around, but clearly, or rather hopefully, they were out and about. So we’ll say that about an hour and half of max flood a Edgewater, the Harlem starts to go slack, maybe a little later.

It started to snow. It was nothing major, but some flurries that persisted for a while. Nothing was sticking, but still – if there is only one signifier of winter paddling, it’s paddling while snow is falling.

The rest of the paddle back was very straightforward. The route from Inwood to Peter Sharp is a familiar one by now, enough that we notice changes over time – construction ended, graffiti scrubbed off sea walls, etc. There was a bit of a headwind from the west as we rounded the bend out towards the Hudson, but it subsided by the time we crossed out into the Hudson proper. Seas were a little squirrely, presumably due to mild wind on slack, partially flood tide, but we made it back to Inwood almost exactly of our goal of 1430.

As cool as it is, it’s March already, and spring is in the air. This trip will help better plan some summer sojourns down this underused waterway.