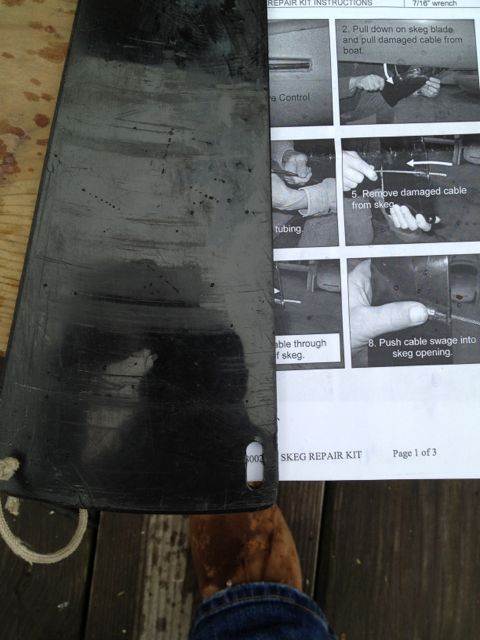 Last summer, and again in the fall, I replace a kinked skeg cable on my own boat, a VCP Argonaut. While there was a fair amount of detail, once I learned the basic mechanism of a skeg, it was very straightforward: loosen two screws, essentially, and pull the bad cable; put in the new cable, trim to fit, and then tighten the screws. Voila, repair complete.

Thus, under the rubric of, “a little knowledge is a dangerous thing”, I offered to repair the skeg cable on one of my club’s older boats, a plastic WS Tempest 170. What could go wrong?

I thought it would be helpful to write up details of that repair, for my own review as well as an informational to others (whether a warning, or a guide, actual mileage may vary). I also feel like I owe an explanation to some of my fellow clubmates, on why something so simple dragged on for months.  While in retrospect, it was ultimately a simple repair, the entire effort was confounded by weather, mistakes, and some additional components that required repair.

I also want to put in a few good words about Tom Holtey at Tom’s Top Kayaker Shop in New Hampshire. I first found Tom’s shop when I needed to replace the day hatch cover on my VCP Argonaut, and I turned to him again for my own skeg cable repair (and ye again, when I kinked it by sliding the control knob against a support beam while pulling the boat out). Tom was a great help in researching some of the more picayune details of this repair, and easy to work with when I needed to return a part and order another. I got nothing but square dealings from him, and recommend him for advice and guidance on kayak repairs.

Assessment occurred in two phases, as more elaborate disassembly was required to ascertain the secondary issue. The primary issue was that the skeg cable was kinked near the rear, a common issue for skegs that occurs when the weight of the boat rests on a deployed skeg, i.e. someone forgot to retract it before pulling it out of the water. The secondary issue was that the sliding control rod, which is where the front of the cable goes, was slightly bent, and not moving straight; hence, even with a good cable, full control could not be restored until the rode was replaced.

Replace the cable and the control rod.

For reference, here is a video of how to repair should go. The skeg blade in the video is the kind that we were dealing with – a detail that would become important later.

Aso for reference, here is a picture of how I dis-assembled the control mechanism on my own boat. I find this part to be the most difficult to explain to people. The only key difference is that the Tempest used a larger Phillips-head screw instead of a hex screw.

In the picture above, I’ve loosened the control knob to slide it over. You can see the skeg cable inside the control rod, through the hole between the two black markings where I had pre-marked the edges of where the knob should return to. In operation, the knob sits between those two marks, and the screw presses down on the cable, securing it. When you move the knob, the control rode and cable move with it. The knob does not slide along the tube.

The first part was: there was a lot of corrosion on every metal piece involved. Detaching the cable from the blade itself was easy enough, but loosening the screw that holds the control knob fast was very difficult. Removing the cap at the fore of the cable tube was difficult, and was only made possible by later removing the entire assembly – which was also a chore. The control rod was slightly bent, hampering removal, and the cable itself could not be detached from the rod. Ultimately, I pulled the cable through the rear part of the way, cut the conduit, and then pulled it forward. That was easier than trying to get the rod through the fore or the aft. I would also end up replacing the set screw months later, when I realized it too was too corroded to be useful.

Here is a picture of the control rod, slightly bent. This was going to have to be replaced. I never did get it to detach from the cable, even after completely removing it.

For an example of corroded metal, here is the aft end of the conduit. Simply disconnecting it was a huge challenge because the nut that held it in place was rusted together with the bolt, and at an odd angle to work with. This is actually one of the prettier-looking components.

This was an easy mistake. The cable repair kit is listed as a single kit, but on the order page, there are different SKUs for different model boats. If no selection is made, the first option – for a WS Tempest 165 – is entered. When I ordered, my eyes went to ‘add to cart’ first, and thinking there was one kit for all, I got the default kit. I wouldn’t figure this out till I got stuck deciphering the instructions.

Here is a picture of our skeg. In the background, you can see the picture from the instructions.

On our skeg, the bottom edge of the blade is here on the left, and the top is on the right. The cable comes in from the top of the blade into the empty square, where the “set screw” sits (see below). The kit that I ordered was for a newer model Tempest, where 1) the cable comes in at the middle of the top edge, and 2) is held in place by a swage integrated with the cable, rather than a set screw.

I didn’t just order the wrong size (Tempest 165 instead of Tempest 170) – I ordered the “Premium Skeg Repair Kit”, which is only for WS models from 2010 and later. The main difference is that the newer cables have an integrated cable swage (a block that holds the cable fast to the skeg). On the older models, they use what’s called a “Cable Attachment Fixture with Set Screw”, where instead of an integrated swage, the cable fits into a small brass block that has a 1/16′ allen screw inside. I tried to make the cable work by snipping the swage and running it into the older brass set screw, but ultimately 1) the set screw needed to be replaced anyway and 2) the cable was too short because I had the wrong size.

This refers to the set screw described above. I was able to twist the old cable out of it, allowing me to remove the set screw. However, after some more close-up testing, it was clear the screw wouldn’t tighten. It’s hard to tell exactly what’s wrong because it’s an internal mechanism, but in any case, it wasn’t going to hold the cable tight.

Here is the set screw, in place. You can see the cable coming down and entering the blade. The set screw faces after (to the right in the photo).

Obstacle 05: Lost time attempting to fit cable and conduit to the incorrect part.

A lot of this experience was a learning process. I watched the videos, set aside tools, and then ran into, “hmm, it isn’t going like it should”. In some cases, this was due to screws and other fasteners that haven’t been touched since the boat was built. In other cases, it was because of the wrong parts, or flat-out broken parts described above. I figure at least twelve to fifteen hours of effort were spent just trying to figure out what the heck was going wrong – and working just a couple of hours per weekend, with a wait of a week or so to get the next step figured out, that adds up to at least 4-6 weeks of lost time.

Similar to above, there were a few weekends where we didn’t have access due in part to Sandy, and even when we did have access, there were a few weekends where everyone in our club was pitching in to clean up and then repair our facilities. I also caught a really bad cold that killed about two weekends in a row for me in February, and later, lost a set of keys that meant I had to coordinate access for a week or two while I got them replaced. That was probably the most frustrating period for me – the end was in sight, but all I all I could do was drink cough syrup and wait for keys. More than anything else though, working on this over the span of weeks rather than days meant having to get re-acquainted every time I came back to it.

Ultimately, I replaced the cable, cable conduit, control rod, and set screw. In so doing, I dismantled these components and also the fore tube where the rode slides into in the Up position. These efforts were hampered by corroded components, a bent control rod, irregular working conditions, and illness. However, once completed, the skeg is functional, fully capable of being extended and retracted fully from the cockpit.

Ultimately, here’s what happened, and which would have gone more smoothly given 20/20 hindsight (or is that foresight).

Remove the cable by detaching from skeg and disassembling forward tube at the start.

Thread the cable from the after and control rod through the fore, and measure to fit.