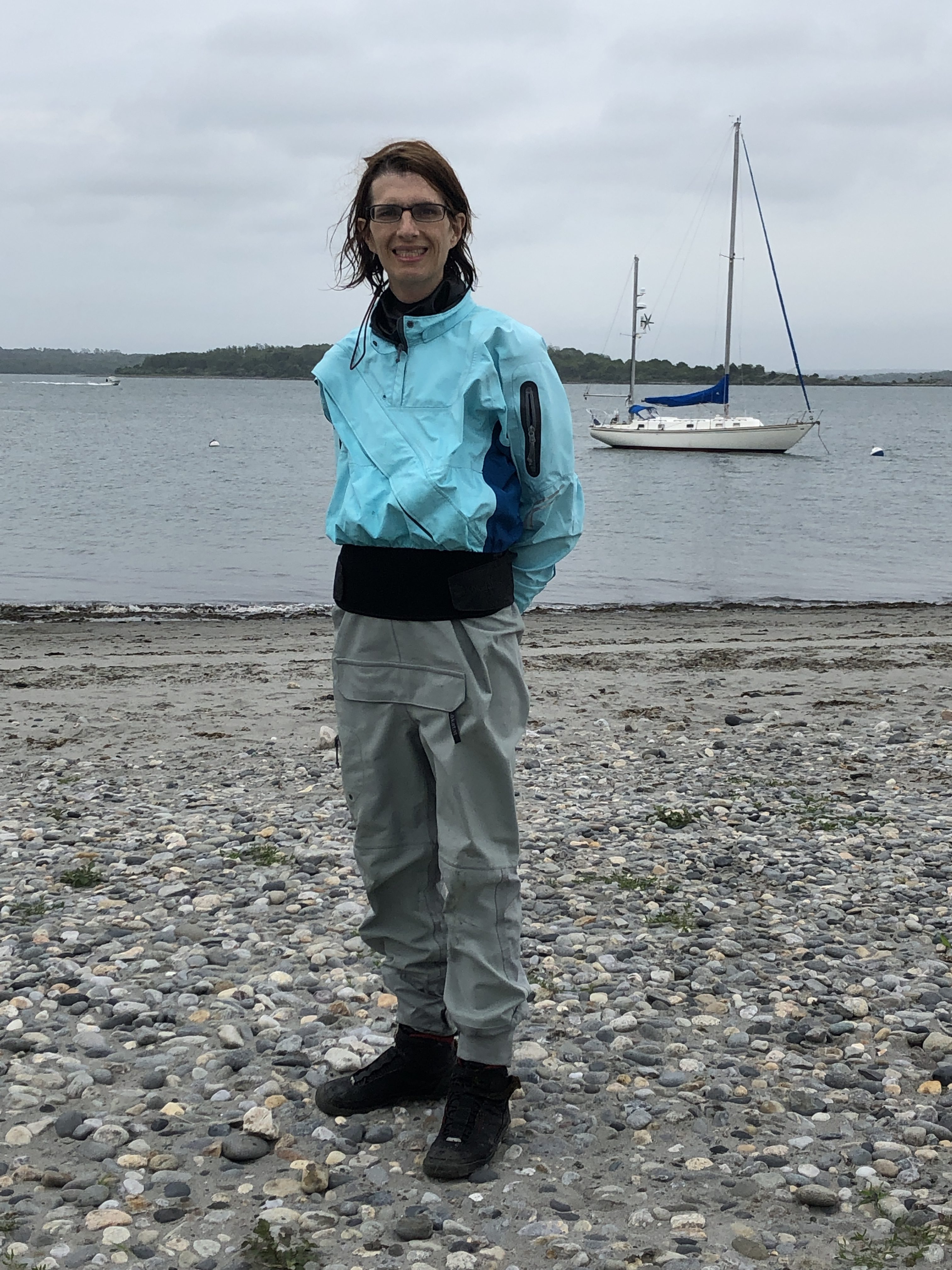 All things come to an end. When it comes to gear, things are repaired or replaced. After approximately eight years of service, my first drysuit, “Ol’ Mango”, was finally deemed to be just a suit, no longer dry.

I don’t tend to personify or anthropomorphize my things. My car, a Saab, is “Saab”. My boats – a Gemini SP, a Pace 18, and Remix 9.5 are, “the Gemini”, “the Pace”, and “Remix”, respectively. My old drysuit was a Kokatat Expedition, womens with front relief (WFR). Usually I just referred to it as “my drysuit”, but its long life and reliability eventually had me referring to it as “Ol’ Mango”, Mango being the name Kokatat gave the color.

I bought Ol’ Mango at New York Kayak Company, back when I was just a customer and not an employee, a time when I was just getting started as a serious paddler, and I wanted to “extend my season”. The suit was already a bit old but had been kept in a sealed bag in a dark cabinet, for protection. A small stain on the leg, along with its long time on the shelf, brought the price down to the high end of reasonable, so I bought it.

The Expedition is a Gore-Tex drysuit with built-in hood. Kokatat warrants the Gore-Tex, and has been known to replace drysuits when the Gore-Tex fails.

The previous year, I had noticed some very, very light leakiness, which at the time I attributed to the gaskets. The gaskets are not warranted, and I’d sent the drysuit in every other year or so to get one or more replaced. In 2018 I noticed some piling on the Gore-Tex, and emailed Kokatat. The response was basically, if it seems to get leaky, send it in. it seemed OK at the time, so I used it over the winter 2018-2019, figuring I would send it in at the end of the cold water season.

Well, sure enough, when I sent it in for repair April 2019, Kokatat informed me that Ol’ Mango was no longer waterproof, and it was time for a warranty replacement. I could choose between a customized Meridian or an Odyssey, the former being essentially the hood-less version of the Expedition, the latter being this year’s new model, which replaces the Expedition in the product line.

After some research – mostly spent on choosing color, since the feature comparison was straightforward, I went with a womens Odyssey, customized for front relief.

Here it is, the day it arrived, in late May.

As it happened, I had paid extra for a service from Kokatat that expedites drysuit repairs and replacements, but since the front relief is considered custom on womens’ drysuits, I still had to wait 6-8 weeks for them to build the new suit.

That meant that I didn’t have my own drysuit for my Lake Champlain camping trip. For that, I borrowed a womens drysuit with drop relief, and I have to say it was not terrible. In hindsight, I would actually consider switching to drop relief, especially if it meant faster replacements.

(In case you’re wondering: “front relief” means a zipper in the front at crotch level, so men, or women with a funnel, can pee without taking off the drysuit. This is standard on mens’. Drop relief, or drop seat, is standard on womens’, and is basically a horizontal hip-to-hip zipper that allows the bum to be exposed for relief in a sitting position).

Since we’re now in the summer months, I didn’t have too much need to use the Odyssey, but I did bring it along for a coaching weekend in Rhode Island in June. The water temperatures were borderline drysuit/wetsuit for me, and the predicted wind meant I would get chilled if wet, so I figured that was a good enough reason to try it out.

The Odyssey works as a drysuit. This is a sort of binary function: it keeps you dry, or it doesn’t. It’s comfortable, it fits, it’s a good replacement for Ol’ Mango. I also like the colors I picked, even if they’re perhaps not the brightest for visibility.

What I Like: Unlike the Expedition, the hood is removable, and there’s a cargo pocket in one leg that is perfect for stowing that. I don’t always need or want the hood, so it’s nice to be able to remove it easily.

What I’m ambivalent about: It’s too soon to say “dislike”, but the Odyssey uses plastic zippers instead of the metal zippers of the Expedition. These are the same used on the Switch-Zip drysuits from Kokatat, and the company says they’re waterproof, but . . .it’s hard to trust something that is different from what you’re trusted before. Metal zippers work – at least when you fully zip them!

There you have it. I’m sure I’ll have more to say about this model once I’ve used it a bit more, and that should be soon, with trips to Maine planned for the fall, as well as winter paddling. It will be a while before this drysuit earns a name, if it ever does. For now, I’m happy to have a replacement. Ol’ Mango served well, but it’s time to begin a new journey . . . an Odyssey if you will.