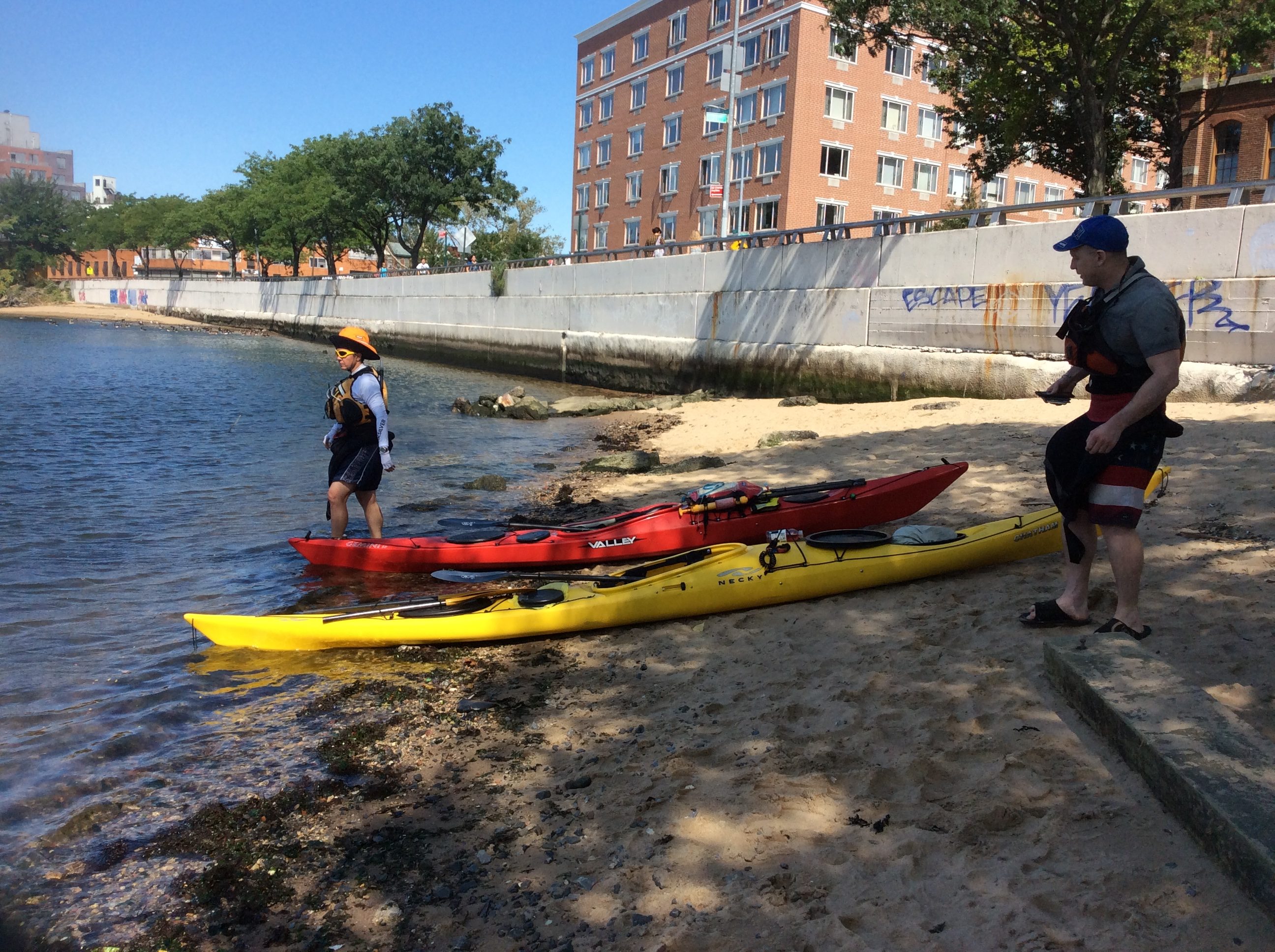 A few months ago I was talking with a friend-of-a-friend about possible circumnavigation dates, and the penultimate weekend of August was looking good, at least for starting in Inwood, where I keep my boats. We were thinking of a combined trip from Yonkers and Inwood.

As the summer went by, schedules changed, people opted in, people opted out, and as the weekend approached, I got in touch with the original friend – Johna @ Wind Against Current – and we kinda snookered ourselves and two others into a late-start circumnav of Manhattan. Basically the current at Hell Gate wouldn’t change in our favor until the evening, meaning either a late night or a bit of a slog.

Johna and I have both circumnav’d a few times, as has her friend AC, so we were looking for a way to spice things up. We talked through a few ideas, but eventually settled on one: we would paddle through Hell Gate near maximum flood and take a lap around the Brother Islands.

KW and I set out from Inwood. The club we belong to was just starting its regular public program, and we helped a bit with that before paddling out into the current, which was near peak ebb. In short order we were flying past the George Washington Bridge, Riverbank State Park, and eventually, the mooring field for the 79th Street Boat Basin.

As we approached midtown, I had my radio on and I issued some securite announcements on channel 13. We saw a small tug pop out, as announced, from one pier, then hop back into another. We were meeting our friends at Pier 84, and found ourselves coming out of swift current between two construction barges.

Pier 84 is directly across the embayment from the Intrepid Sea-Air-Space Museum, a retired aircraft carrier looming over the water it shares with Manhattan Kayak Company.

We found Johna and AC, and after a bit of a pit stop, we all got on the water and set out.

Now, to be honest, I didn’t take a whole lot of other pictures. I’ve done enough circumnavigations that I should probably do a super-cut post. Hopefully words are sufficient.

We paddled south, past the immense bastion of glass and steel known as Hudson Yards, and a bit further down we passed Pier 66 and later Pier 40, where I used to teach at the now-defunct New York Kayak Company. I talked about various bits of city history along the way, impressing my friends – or maybe boring them into polite affirmations. The Manhattan waterfront is awash, so to speak, with stories.

As we came around Battery, we found the water calm and the traffic light. We held position as the Staten Island Ferry arrived (the Molinari, not her sister the Barberi), then passed a Governors Island Ferry that seemed just about done loading up.

Turning up the East River, we found ourselves confronted with a bit of a headwind. The predictions had been for F4 NNE, and that was about what it felt like. One of our number struggled a bit and, after some discussion, we decided to keep on the Manhattan side of the river rather than cross traffic, and we sheltered behind the Brooklyn Bridge tower to talk through some top tips on paddling in wind. Then we proceeded north.

Splash! And what was that? I turned behind me, and saw a seaplane had landed as we passed the 20s East. Little known to most tourists, there is a seaplane landing field in the East River. While I’ve known about it for a while, I’ve only ever seen them in operation when I took my niece on a Circle Line tour. This was the first time I was in a kayak and saw one land (well, having just landed) and later, take off from the water.

As we approached the southern tip of Roosevelt Island, one of our number felt the pain of an old injury tightening a muscle. We decided to make a brief stop at Hallets Cove rather than shoot through the Manhattan channel, and there we took a small lunch as well as a stretch break.

You’re not seeing double – one fun coincidence was that we had matching boats – Johna and I in our red Gemini SPs, and KW and AC in yellow Chathams.

We took a little time to talk though the next part. Hell Gate is a narrow tidal straight about a mile long, connecting the lower East River with the upper East River, and more practically, is where water flows between Long Island Sound and the New York harbor. It has the fastest currents in the area, to 5 knots, and we’d be going through within an hour of is peak flood, closer to 4 knots. It’s also full of eddies and boils, and is a channel for shipping.

Our plan was basically to shoot through the gate and then arc around the Brother Islands, which form the corner around which most shipping turns. KW was not feeling up to the extra miles, though, so we worked out that she would stop at the entrance to the Bronx Kill, a creek between Randalls Island and the Bronx.

For the most part, that plan worked. The only wrinkle was that after I went to find Johna and AC, I didn’t catch up with them. Halfway around the island, I radioed, and heard loud and clear they were on the other side. I paddled on around to the other side, passing a small fishing boat and a sailboat anchored next to the island. I came around to where I’d started and . . . no sign of them. I radioed again, but got no response.

Well, that’s why backup plans and redundancies are important. We all knew we’d be meeting back at the kill, so after a few minutes, and noticing my radio battery was running low, I paddled there and, sure enough, as I approached, heard them on the radio saying that was indeed where they were. KW was rested, our curiosities had been sated, and we set out along our way.

By this point, it was about an hour before the change in the tidal cycle, so while it wasn’t easy, we were able to slowly paddle up the Harlem River. The wind was not as strong, sheltered as we were. KW was clever and kept near the shore, where the current was weakest against us. As expected, halfway up, things did get a bit easier, and by the time we were approaching the Broadway Bridge, the current was in our favor for the last, bucolic, portion of the Harlem.

We did not see the Inwood Seal, but neither did we spend a lot of time looking for him. While KW and I were approaching the end of our journey, our friends still had miles to go, and would be paddling at nautical twilight or after dark, so we didn’t want to dally.

After a brief stop at our boathouse, they put on some layers against the cold and affixed lights, just in case. After some goodbyes, they departed, and KW and I cleaned up our boats and put them away for the night.

I’m honestly not sure whether I did a circumnavigation last year, and it’s pretty likely not. I was a little worried I was out of practice, or shape, and I knew that with the advent of NYC Ferries, there was a lot more traffic on the water. This was a bit of a refresher for me, as well as a chance to do the trip in some ways I don’t normally.

I was happy to see that I can still make the trip, and the traffic is not all that bad. There are some things I’ve done by default that are based on having led groups of mostly beginners or first-timers, as well as based on starting in Inwood. I have a better sense of the variety of options where to stop, take breaks, or press on, based on the experience and endurance of the group.

Some other variations I’d like to try would be to go around Governors Island, or landing at Baretto Point instead of Hallets Cove.