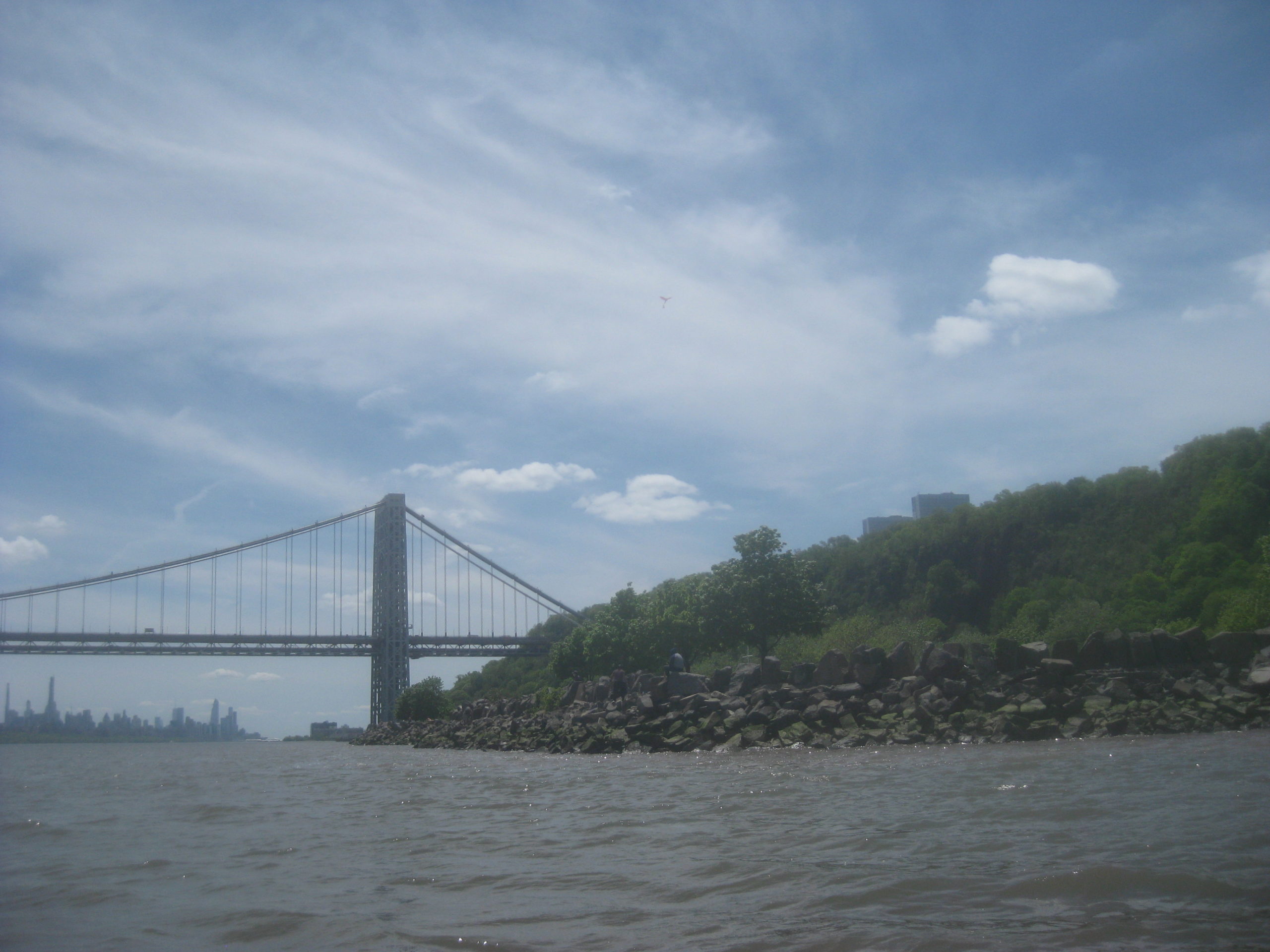 Some paddling is about distance. Other times, it’s about effort.

You might write about how far you went: ten miles, twenty miles, thirty miles. At a normal pace, any of those might be remarkable, but if current is in your favor, less so.

This past weekend was one of good weather here in New York City. Unfortunately the tidal currents did not favor (once again) my preferred destination, so instead I made do with what was available. After a brief warmup, I paddled north, against near-max ebb current exceeding two knots, to the Spuyten Duyvil railroad bridge.

It was quite a workout. The Duyvil is a mile or so north of the Inwood Canoe Club, where I keep two of my boats. I was in my fast boat, a Tiderace Pace 18. I paddled and paddled, keeping close to the shore, but not as close as I would have liked because a steady breeze from the northwest tended to push me closer to the rocks – and at a low tide, many more of the rocks were exposed, or nearly exposed, than usual.

A pack of jetskis roared by in the distance; after some apprehension, they went under the railroad bridge into the Duyvil. I followed suit shortly after, a bit more gracefully in my opinion.

The little cove on the inner side of the Duyvil was quite low.

I paddled on a bit, past the Henry Hudson Bridge and Muscota Marsh. The flat near Columbia University’s old boathouse was also very low and muddy.

For that matter, Muscota Marsh was also quite low. At a higher tide, the entire marsh can be paddled, going far back into Inwood Hill Park. Even as it drops, a narrow channel along the north edge is navigable. At this point in the the tidal cycle, however, a stalking bird walking in the mid might have been taller than me sitting in my kayak.

Many of the paddlers I learned to paddle with only pass through the Duyvil, typically on a circumnavigation of Manhattan. Since moving here nearly ten years ago, I’ve come to appreciate the details, being based close enough to observe the area at different points in the tidal cycle. The Henry Hudson bridge soars above, and the Columbia C often prompts people unfamiliar with the area to inquire what it’s there for.

Having had a bit of an aerobic workout coming up to the Duyvil, once I found flat water I practiced my dance moves; this is only the second time I’ve been out in a kayak since February. Hanging draws (both sides for bilateral symmetry), bow rudders, stern rudders, low-brace turns, all of that forwards and backwards – I’ve still got it, albeit developing confidence and re-activating muscle memory from being shuttered inside so long.

After that, I paddled to the opposite side to escape a breeze that had blown up. I contemplated the layers of schist that form so much of the local geology, as I noshed on an energy bar.

I decided I’d had enough; I wanted to get back out in the open, and there was current left ebbing on the Hudson. I took in a last view from this unusual spot.

I paddled by the Spuyten Duyvil railroad station. There were people waiting for the next Metro-North train. This runs along the northern, or Bronx side, of the Duyvil. The rails connect with the north-south line that branches onto the railroad bridge.

Before I passed back under the railroad bridge, I heard radio traffic indicating boats wanted to pass through. The bridge rotated to its open position, and I saw the first of a handful of recreational powerboats come through.

I could see a bit of struggle as they tried to find the line to take. Since the current ebbs out at an angle and then curves, it’s impossible to come straight through; the current carries south as the boat is driven east. They passed through though, without issue.

I paddled across the Hudson, initially attempting a ferry but eventually going with the flow, carried south and then paddling up a bit. The state park on the opposite shore was wide open, the lot packed with cars, the shore lined with people.

Further south, a considerable number of people ambled: couples, people with dogs, people in families. It was a nice day and, as spring continues to unfold, people are tired of being cooped up at home..

Before continuing on, I took an old-fashioned selfie, by pointing the camera back at myself and firing blind.

After paddling south a bit, chatting with a couple of people along the way, admiring some girls dancing to a pop song blaring out of their speaker, I crossed the river again, aiming towards the red buoy at first, then allowing myself to drift south and arrive well below the George Washington Bridge.

After attaining a bit, I turned and caught a picture of a barge I’d seen while I was crossing.

At this point, my trip was very similar to last week’s. I waved at people on shore; I played a bit in the current, albeit on the ebb cycle rather than the flood. Eventually, I decided to head back, fighting an ebb that was much weaker than when I started, and a but further out so as to avoid fishing lines.

Spring is definitely here; it’s warmer, more humid, and generally nicer lately. It’s all too easy to forget that we are still in the grip of a global pandemic.

That said, perhaps a little out-and-about is good now and then.