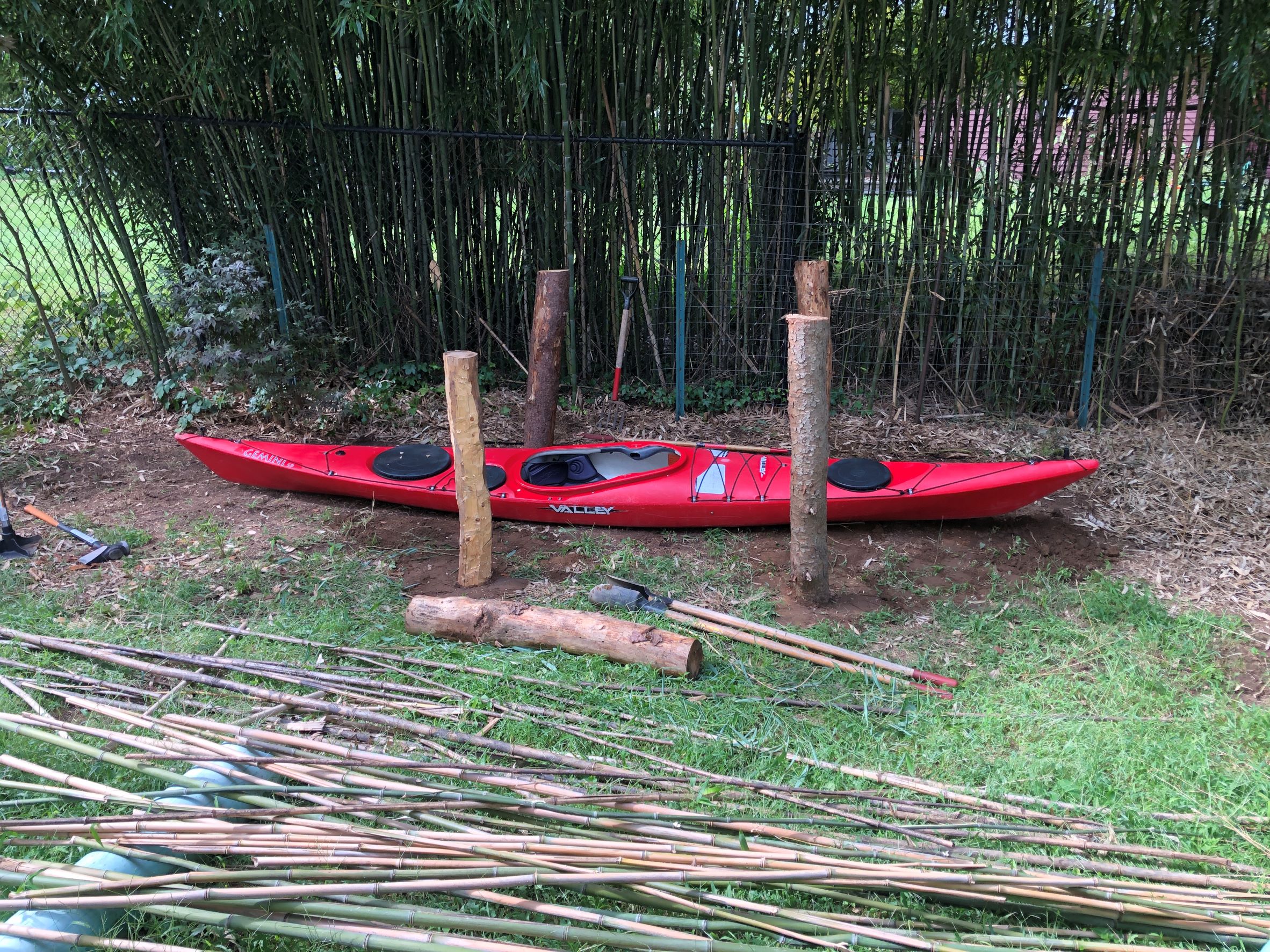 While this is strictly speaking not a paddling post, it is kayak-related. I built a kayak rack.

As you might imagine, the Cowgirl has accumulated several kayaks over time. When asked, a quick inventory must be taken, accounting for where they live. Presently at the boathouse: A Valley Gemini, a Valley Pintail, and a Tiderace Pace 18; at the house in the ‘burbs: a Necky Chatham 17, Valley Avocet, Valley Argonaut, and a Liquid Logic Remix 59 (the lone whitewater boat for now).

Further to your imagination, you might wonder: where exactly are all these kept?

Well for starters, the garage has been home to three of the boats in the ‘burbs, and the three at the boathouse are housed in the boathouse. The Argonaut has lived in a covered spot sheltering the walkway between the house and garage. It’s only the Avocet that has tipped the inventory in favor of building a dedicated spot for storage, lest it spend too much time in the sun.

The yard has a lot of woods in the back, and the neighbor next door has allowed his bamboo to run. I took an old tree that had fallen and been cut into pieces by Mister Cowgirl and set those as posts.

One of those, the forward left, I’d previously attempted hewing, just for fun, which is why it has no bark.

Then I borrowed a powerful drill and put holes in those posts. Rather than glide over this fact, let me just say this was the most labor-intensive aspect of the job, requiring strong, steady pressure, and a bit of chiseling to smooth things out.

The posts were thick enough that I could not drill straight through, so I used a thin, long bit to drill a pilot hole, then the spade bit to approach from both sides. In general things lined up, but it wasn’t perfect, so I used a chisel to broaden the opening where needed.

I used thicker pieces of bamboo for lateral rods the boats could lay on, as well as the legs of the frame for the tarp. The spine is an old cherry tree that came down; we’d been saving that for a possible project, and here we were with a project in need of wood that size, with a bit of curve to it.

Finally, the one purchase made toward this endeavor was of a large tarp, to shelter boats from UV. Ultraviolet light weakens rubber hatch covers and lightens pigment; I also wanted to keep excess rain and eventually snow off the boats. I hung the tarp, then staked the corners.

It tapers in the back; the open end can be pulled shut. I’ll refine this a bit to make it easier to close up and be more securely fitted.

One other thing I had to do was cover some of the pokey bits of the spine, to prevent them from scraping or poking through the tarp. For now they’re covered by plastic flower pots, but I plan to cut some old tennis balls for a better solution.

For now, only the Avocet is there, but I’ll move a couple other boats over later this fall.