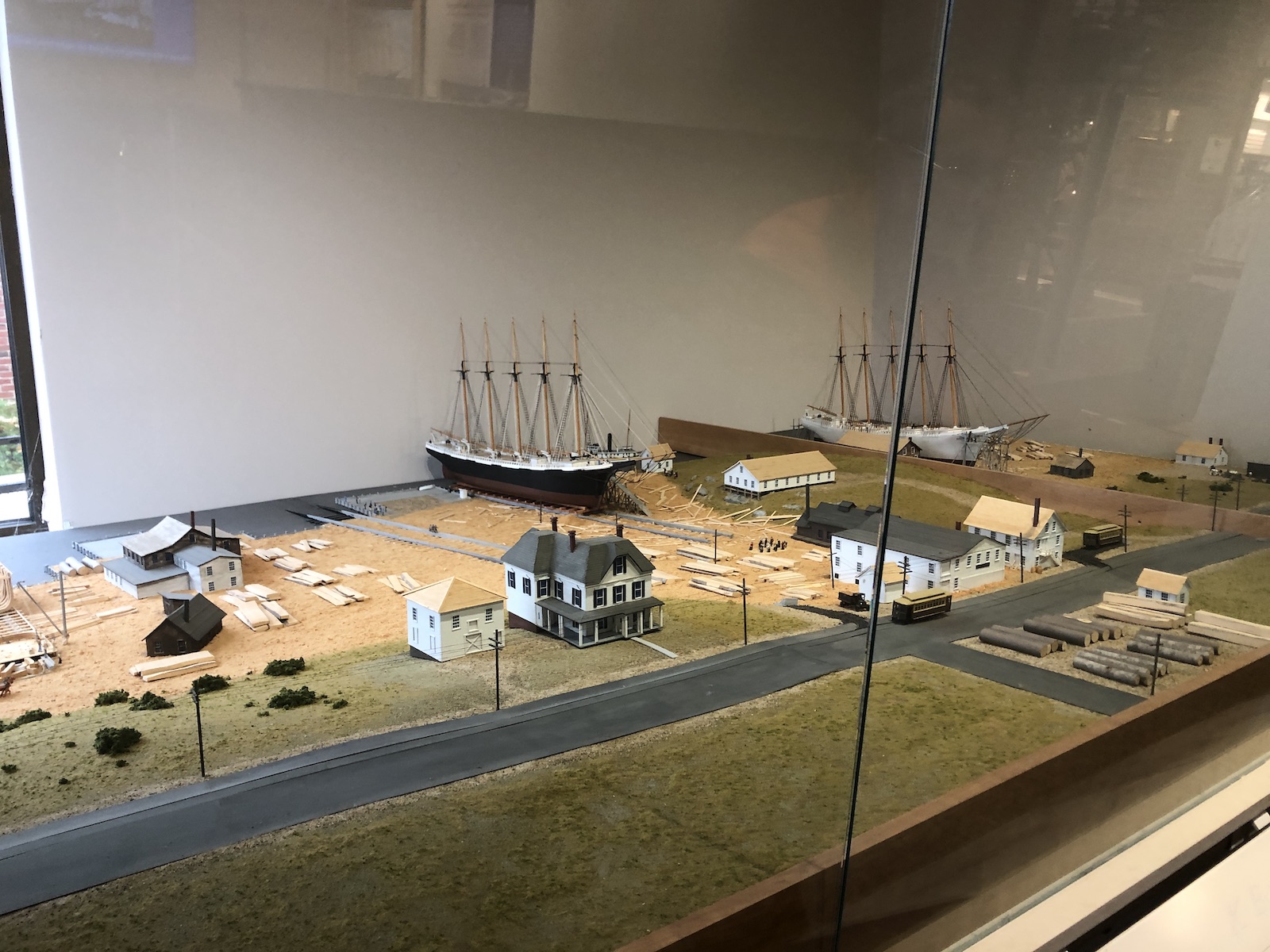 While we were waiting for the paddle wagon to get fixed, we spent some time in the Maine Maritime Museum. It appears deceptively small, judging by the museum building alone. It’s much larger once you realize it includes the grounds and restored buildings of the old Percy & Small shipyard, which produced some of the largest ships of their era.

Approaching the museum, a large sculpture of the largest ship ever built there, the SS Wyoming, dominates the grounds. It’s a metal outline of the ship, and gives you an idea of the scale of industry that once took place here.

Inside the museum are several of the kinds of artifacts you would expect: examples of seamanship, old tools, and lots of paintings and models of ships.

Unfortunately, I didn’t get a good picture of the best exhibit in the museum, which is the old light from atop the Cape Elizabeth lighthouse, but the museum has better pictures anyway. One thing we learned was that in the 19th century, engineers decided that open pools of mercury were the best way to lubricate the gearing the rotated the light. That may explain the many stories of lightkeepers slowly going mad.

Outside, the grounds had a mix of historical buildings, and fun setups like this:

Mister Cowgirl and yours truly were taken with the boat building / restoration shop. A series of boats were in line to be repaired, and on exhibit was this old Old Town Canoe, designed for romantic “canoodling” a century ago, with seating arranged to put two lovers a bit closer to one another in the boat.

The museum has a team of volunteer boat builders, who work out of a shop at the top of one of the old buildings. Several of them were having lunch, and Mister Cowgirl got to talk to his heart’s content about building and tools and boats and what-not.

One exhibit included several old lobster boats, and informed us on the history of lobstering in the area. It’s quite interesting, with families invested long-term in keeping licenses, and marine patrol trying to keep everyone honest.

The main building on the grounds, restored from the old days, is a giant mill and finishing house. Raw material would be brought in, planed, cut down, and shaped for building.

A labyrinthine series of belts connected everything to a single dynamo.

And yet, even smaller details were accomplished here, including sail-making and rope-splicing.

A lathe! Mister Cowgirl has a newer model in the basement of his home.

As we walked the grounds and realized the effort and number of tasks involved in building a ship, the overall scale came to life. This was a large manufactory that produced immense, complex vessels.

Later, as we took a walk downtown, we spotted “Maury Povich”.

Bath is a very interesting town; the museum is excellent, but in addition to that, the historic downtown is quite nice. I’d recommend a stop there – perhaps one not involving automotive distress.