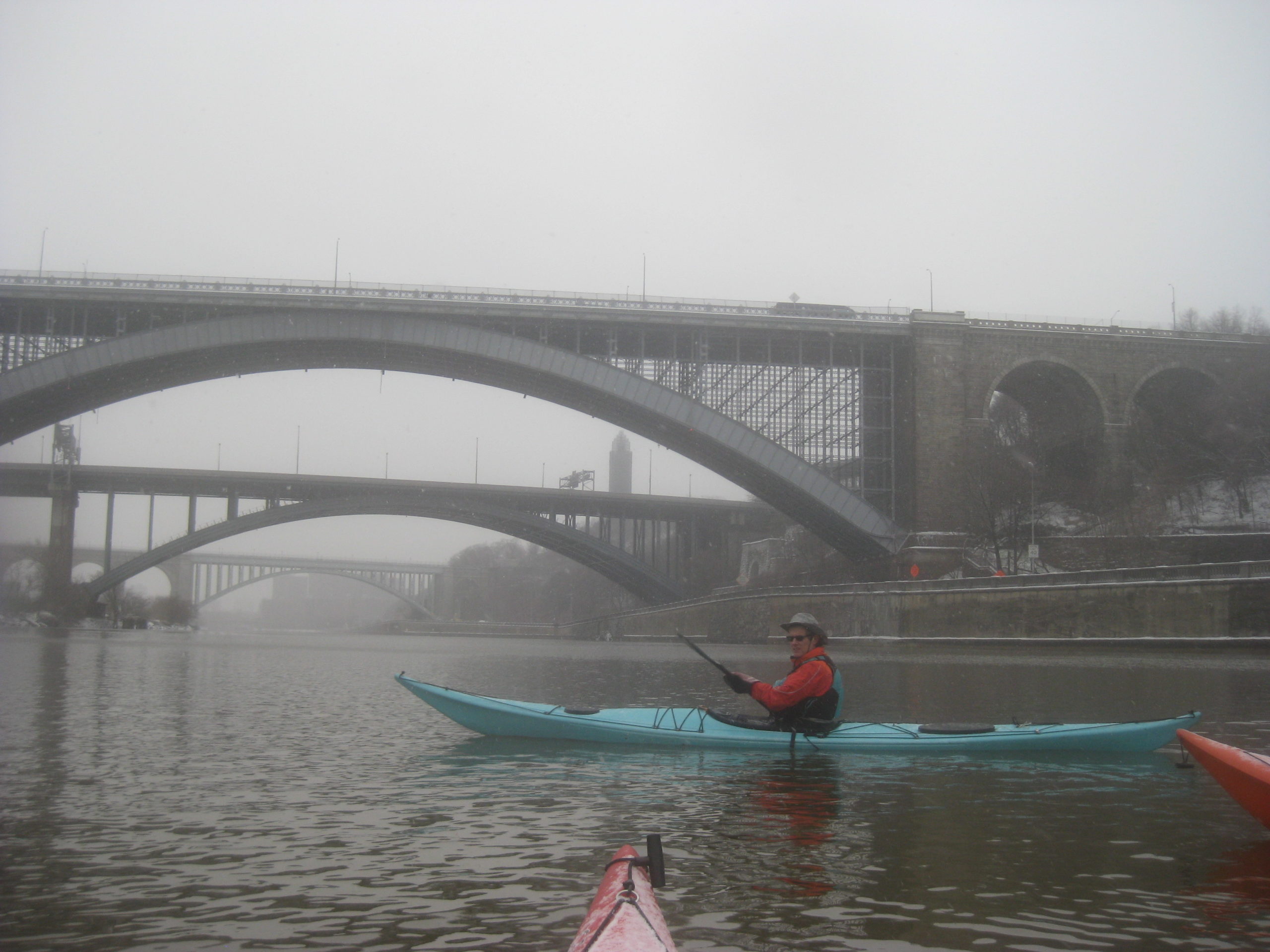 You couldn’t have had a sharper contrast to last week’s warm weather paddle, which was blowy but in t-shirt temperatures, pushing 70 Fahrenheit.

Mister Cowgirl joined me and VT, a fellow member of the Inwood Canoe Club, for a nice snow paddle this past Saturday.

The first challenge was street parking. With all our gear, we opted to drive, but once again found that for unstated reasons, the parking lot near the boathouse has been blocked off.

We unloaded and walked down the snow-covered bike path with our gear.

At the boathouse, we took in the environment. The snow was sharp and icy, as opposed to soft and fluffy. Visibility was less than a mile; if you squint, you might be able to make out the outline of the Palisades across the water.

We loaded the boats in the boathouse, to keep out of the wind as long as possible. The floating dock was covered in “dust on crust”, to borrow a ski phrase: snow on top of a layer of ice.

The current would be flooding all afternoon – northwards up the Hudson, southwards down the Harlem, for the most part. We opted to head into the Harlem for more varied scenery and a bit more shelter from the wind, even though it would require more effort coming back against the current.

Around the bend we went – past the Henry Hudson, past the Columbia “C”, underneath the Broadway Bridge. As we passed the MTA train yards and approached the 207th street bridge, visibility cleared up and we began to enjoy ourselves.

Along the way we passed a shed where the city keeps sand for the roads. We chatted a bit with the driver of this front-loader. He was keen on learning where he could try kayaking – but not in this weather! We told him about the club’s public program, free kayaking Sunday mornings, Memorial Day weekend through Labor Day weekend.

We made it as far as High Bridge – the first of what I think of as three sister bridges. High Bridge was the city’s first aqueduct, and is now a pedestrian thoroughfare. The Washington and Hamilton Bridges are for vehicles. The latter preceded the former, and confusingly, it’s the former that connects to the George Washington Bridge over the Hudson.

We wanted to get back before dark, even moreso as another round of fog rolled in and reduced visibility once again. We paddled back the way we came, steadily and more purposefully. When we came ’round to the Hudson, we once more found ourselves staring into a pile of fog.

Approaching the boathouse, I took a picture to try and capture the path lighting in Fort Tryon Park. While it’s blurry, I hope you get the idea, of little specks of yellow light popping out of the hillside.

Back at the boathouse, that ice on the floating dock made exiting the boats a little awkward. It wasn’t slippery per se, but to avoid slipping meant being a little more particular about placing weight, and as I climbed out my boat slid away from the dock. I used my paddle to drag it back.

In the above picture, normally you can see the George Washington Bridge just about a mile south, from this vantage.

Even after carrying the boats in, there was still an even pile of snow on the decks. When we were done unloading and placing the boats back in their racks. Mister Cowgirl swept the fallen snow, lest it turn to ice and make the floor treacherous for future visitors.

Altogether this was a good paddle. It was quite cold but properly layered, the temperature was not a problem. The car indicated 30 F when we got back to it. I was happy to find that my neoprene skullcap was not only good insulation, but able to fit over my paddling glasses.

Winter’s here, finally. It’s only a question of how long it will linger, and whether it will stay, or simply come and visit every couple of weekends.