The Duyvil in Winter 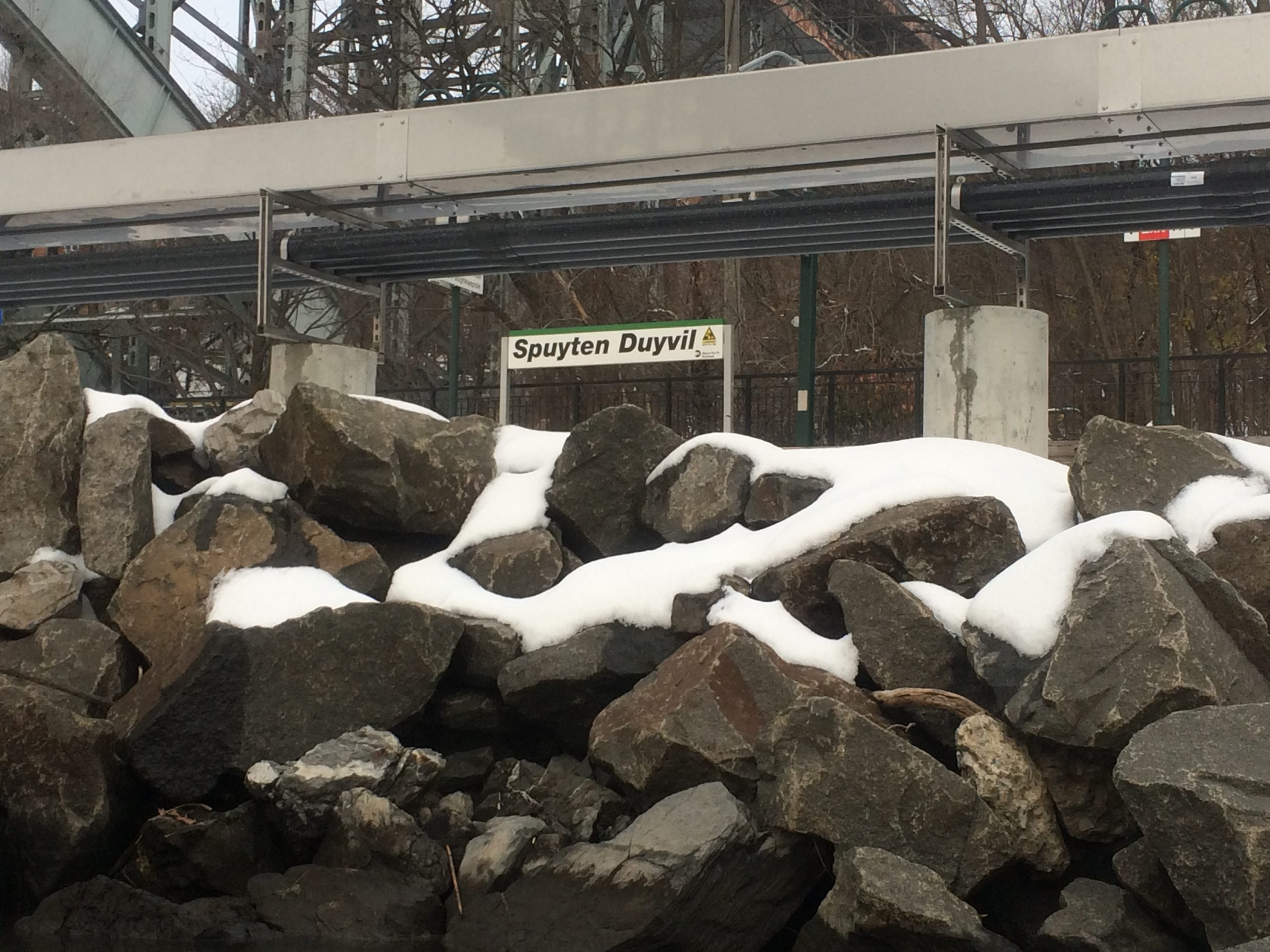 After a nor’easter dumped a lot of snow in the city earlier this week, the winds died down and the sun was predicted to come out on Saturday. While temperatures were at or below freezing, a lack of wind and extra layers made it bearable, and I considered going for a paddle.

That said, I will admit to dithering, and waiting until early afternoon for the day to warm up just a bit.

I wasn’t the only one. When I arrived at the boathouse, there were four other people preparing to paddle, and two others doing work on the grounds. The sun was bright and the air was crisp but not frigid.

While I considered going with the group, in the end I felt more inclined towards a solo trip. They crossed the Hudson and went north along the Palisades, eventually seeing several bald eagles; I meandered into the Harlem River, a portion previously known as Spuyten Duyvil Creek, and took many more photos than I expected to.

Lightly loaded, I launched and set out to the north, paddling along the Hudson edge of Inwood Hill Park, the wooded remains of the marshmellow world we’d been bestowed just days earlier.

In short time, I arrived at the Spuyten Duyvil Railroad Bridge, which Amtrak uses to exit Manhattan to points north. It’s a rotating trestle, refurbished a couple of years ago in an extensive rebuilding project. In busier times it’s not uncommon to hear radio requests from vessels asking the bridge to open and allow passage.

Paddling under, I peeked into the little bay on the south side of the channel. Inwood Hill Park dominates this part of the river on the Manhattan side, and small trails loop around the hill at different elevations.

Passing under the Henry Hudson Bridge, I took a shot of the large blue apartment complex situated about the Columbia C. It’s hard to make out in this photo – in real life as well – but there is actually a cut behind the cliff face and in front of the building’s perch, which allows the Metro North rail line to pass through. You can see here a bit of train in the lower left.

Part of the park includes Muscota Marsh, a large shallow area that becomes a mud flat at low tide. Fortunately, the ebb had only recently started, so I was able to paddle straight across and grab some pictures of kids sledding in the park.

The sound of laughter was very pleasant. A few people pointed out the red kayak on the water.

While the water had only begun to ebb, as I continued eastward, it picked up speed, and I had to work a bit to make progress. I decided that in the interest of time, I would only paddle as far as the Broadway Bridge before turning around.

That at least got me pictures of these “tide-cicles”: icicles that formed on the cliffs just below Columbia’s sports complex, apparently cut off at the earlier tide level.

I crossed the Harlem and ended up on the other side, drifting a bit westward before arriving near Marble Hill station. I greatly enjoyed this view of the entire stretch of river I’d paddled along.

Moving right along, I approached the Metro North station named for the body of water: Spuyten Duyvil. A train pulled in and took a moment for passengers to embark or disembark.

There weren’t a lot of passengers.

I wasn’t ready to head back, so I followed the flow out of the Duyvil before turning north. There are several large pilings on that side; I’ve never really thought about their purpose, but I imagine it’s partly to keep ships from veering too hard to the shallows in the north, and possibly to break up ice floes, although most other areas along the river add angled iron on the north side of their pilings to help break up the ice.

I paddled north for the final stop on my meandering itinerary: the Bridge to Nowhere. It’s both closer than you think and farther to paddle than you might imagine.

This is a rare item that seems to have no known provenance. Obviously it was a way to get over the tracks and down to the water, but it’s an odd place to have had a dock or maritime operation, and it’s so old that records are hard to find.

By this point, the sky had turned overcast and the temperature had begun to drop. It wasn’t quite sunset, but the sky was growing dim.

I took a few moments to enjoy the serenity of the view, and to contrast that with the mayhem that has beset most of the calendar year. It’s hard to hold both at the same time; the best I could manage was to hope to have more of the former in the coming new year.

With that, I began paddling south. Gentle following seas arrived, with no apparent motivation – waves just a few inches tall, a few feet apart, pulsing my boat as I paddle-drifted on the way home.

When I arrived, I lifted my boat out and began unpacking; in short order the other party arrived as well. Boats cleaned and put away, I called it a day, and went home happier for having paddled in near-freezing temperatures.