All the Peeps Peepin’ 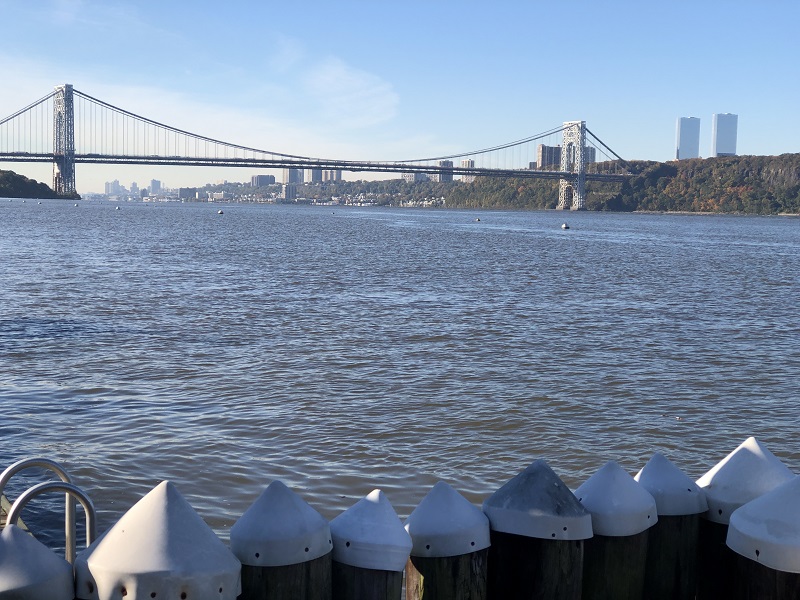 “Hey Siri, what’s the temperature outside?”

It was predicted to get warmer, and be sunny, but all the same I brought along my wool sweater to wear under my drysuit. It’d be a good day for a nice solo paddle, but it’s also been about three weeks since I paddled anything.

I was also going to try out my new toy: a Braca IV wing paddle.

I was the only one at the boathouse in the morning. I pulled down the Pintail, newly lodged in a more accessible slot, and got myself kitted out. I didn’t plan to go far, or for long, so I had my basic first aid, some water and tea, and some power bars.

As I was getting ready, I heard someone call out. A kayaker had approached from the water, and it turned out she was someone who took a skills assessment I offered in the summer, MK. She was up with a group of folks who had paddled from Hoboken, which is considerably farther south. We chatted for a bit before she went to catch up with her group, and I finished kitting out.

I’m not new to wing paddles, but I’ve not used one regularly. I recall the first time I tried one, I almost pulled myself into the water, but since then I’ve learned basic technique, and even managed to roll once with one. I’m happy to say I took to the paddle pretty well, and alternately, “just paddled”, and then slowed down to try finessing the stroke for the blade. It’s adjustable between 205 cm to 215 cm, and I tried that as well; 215 was great for a leisurely touring stroke, and 208 was about as short as I would go for racing power strokes.

I caught up with the group where they had stopped, on the beach of Tubby Hook. Amongst them was another paddler I know, CC, someone I’ve worked with from somewhat early days and on through to an L3 assessment, and who has since pursued the instructor route as well. Another member of the group just started paddling this year, and was already to the point of wearing a drysuit for an autumnal paddle. It was really nice to see a wide range of experience and stoke all at once.

Did I mention autumn? We’re in peak leaf-peeping season.

After some more chit-chat, I paddled north and into the Harlem river. The current had just turned north, but I continued on, past the Columbia C, the Broadway Bridge, and south towards the 207th street bridge. I stopped and chatted with a fisherman who was set up in a spot that used to have a lot of detritus; I wanted to congratulate him on finding a good, new spot.

He was impressed with my boat, and that I’d be out on the water at all with the river traffic (there was hardly any that day, but touring boats are known to cruise through regularly). He said he catches eel, a lot of eel; when I asked, he said he does eat them.

A bit farther south, I saw a cat walking around a fairly extensive platform that might have been someone’s home as well. The cat walked away and a human walked up, less friendly initially, and harder to understand. After a brief chat, I continued on my way.

The Harlem waterfront has changed quite a bit, mostly in getting cleaned up up and with new storm-proofing elements. There is some real estate development tied in with it all as well, some of it controversial in the neighborhood; it’s hard to know what to cheer and what to condemn.

I slipped into a cove that is usually too shallow, even for kayaks; I tried different techniques with the wing paddle, and I ate a power bar. After toodling around bit more, I started back, by now with plenty of current with me.

The water level had dropped since I came in. Believe me when I tell you that the Harlem floods to the south and ebbs to the north.

As I came past Tubby Hook again, the group was still there, and we had another chat. They’d availed themselves of local establishments for food and coffee, and were just about to leave with the ebb tide on the Hudson, which was just beginning. We’d chat again later as they paddled past the boathouse, by which point other members of our club had shown up.

All in all it was a great day; I was only out for a couple of hours, but it was very pleasant. I got to try my new toy, and I got to spend some time, finally, in the Pintail (backband needs some work). It’s also a fine kickoff to drysuit season, though a wetsuit and jacket would have been fine on this particular day.