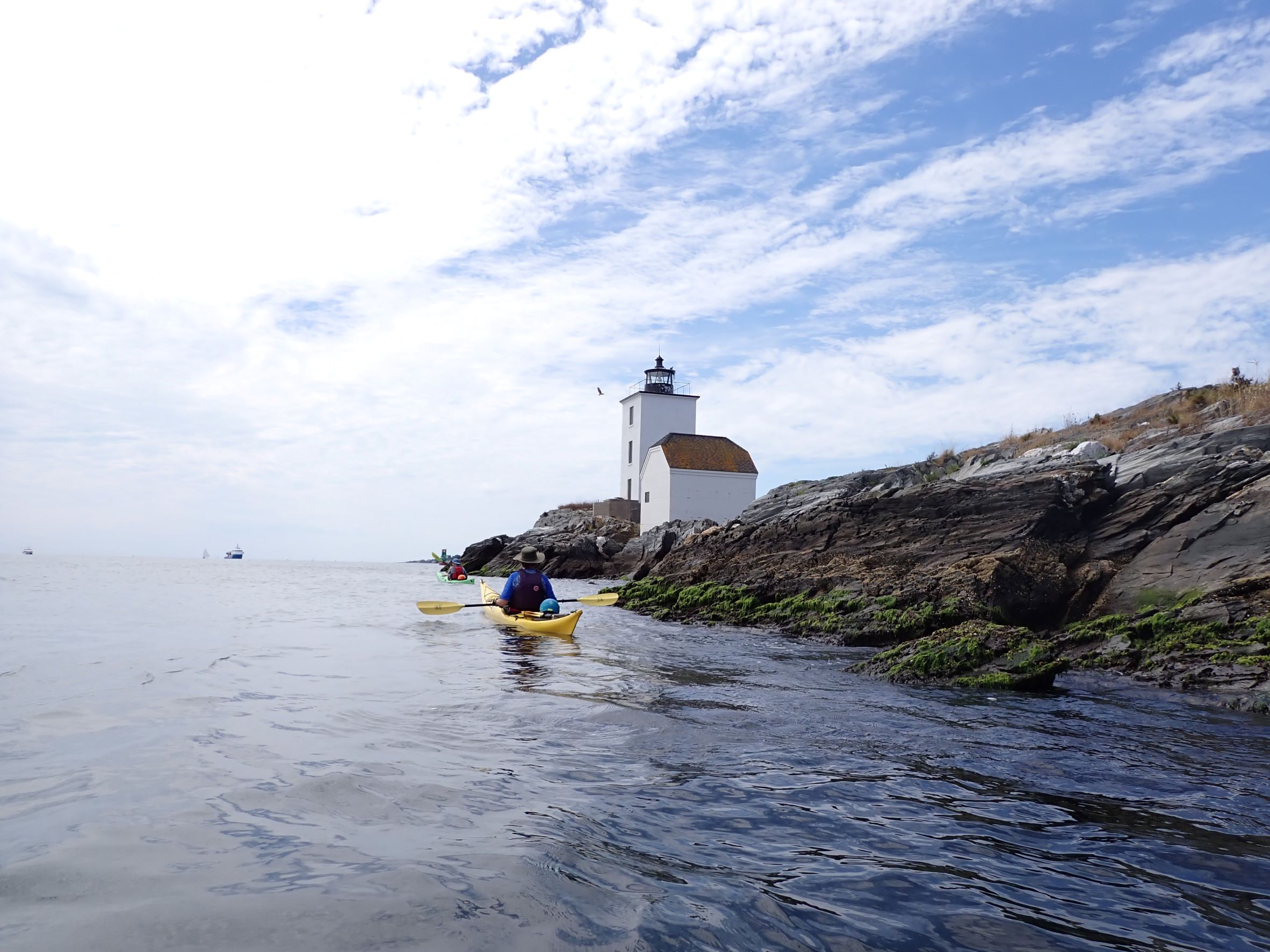 I recently took some beginners from my club, the Inwood Canoe Club in Manhattan, to Narragansett Bay in Rhode Island. This was probably the biggest trip I’ve organized yet, and I’m happy to say it worked out – with one non-paddling snafu at the end.

For one thing, we camped in a local campsite run by a town on one of the islands in the bay, and it turned out that most of the participants hadn’t seriously camped in years; in some cases, since they were children. Thus, in addition to paddling, we had to have some sessions ahead of time on camping, how to pack gear and so on, as well as sorting the logistics of food and tents.

For another thing, bringing half a dozen participants as well as myself meant we have to get seven boats there and back, a distance of over 180 miles each way, as well as local driving to various venues. We also had to bring all the kit, including helmets for being near rocks and swell. For a club where most paddlers simply go to the boathouse and go casual touring with basic kit, this was a non-trivial change in paddling operations.

It worked out very well though. That is, except at the very end.

We drove out the Thursday before the weekend, having loaded the trailer at the club the day before. The club has a small fenced-in lot next to its garden entrance, and we keep a kayak trailer there, partially disassembled and out of the way. Assembling the trailer, checking the lights, and loading the boats can take quite a while, so staging it the day before made sense. Thursday morning, we just had to meet and load food, people, and kit into our cars. My station wagon towed the trailer.

One challenge in leaving the city is that trailers are not allowed on the parkways, necessitating local roads to the highways. Mapping apps do not understand this, so it took a bit longer for me to figure out how to get from the boathouse to the interstate. Fortunately I had a good flight engineer at my side.

On Day One, we took things pretty easy. At least one person in the group had not paddled in over a year, and most had only paddled intermittently this year, for a variety of reasons. The bay is more exposed to ocean swell as well, and on top of that, most participants’ paddling experience was choosing to go north or south on the Hudson River, as opposed to the variety of directions on the bay.

We spent some time assessing the weather and sea conditions and making decisions as a group, a practice we’d continue every day that weekend. For Day One, we put our boats in at the northern tip of the island our campground was on, in sheltered water, with easy access to more open water.

There was a bit of wind, so to warm up I had the group practice paddling a square-ish box to turn upwind and downwind, and to paddle into, down, and abeam to the wind, and working out strategies for each.

Subsequently, we paddled across the channel to Dutch Island, where we paddled along the short down to the lighthouse; we found a small ledge to get an initial taste for rock-hopping.

At the end, we hand-trucked the trailer to its parking spot and carried our gear back to camp. After a freshwater rinse, everything was laid out to dry. We repeated this the next two days.

Camp was nice. The day before, as we set up, I could see everyone gradually shedding their work selves to their vacation selves. Needs become simpler and more easily fulfilled. Three days on the water, even though structured as a learning trip, only enhanced the conviviality and bonhomie.

On Day Two, we were joined by CZ, a fellow coach and leader who knows the area a bit. She brought one of her students, and helped pick the venue. We still had a briefing with the group to understand the choices available, allowing them to choose which direction we’d go from the venue. We decided to keep along the southern edge of Fort Wetherill, heading westwards towards Mackerel Bay.

Before we left our sheltered cove, however, we had practiced hovering in front of the shore: getting as close as possible, or coming in with speed and making sure we could stop, simulating swell.

Along the way, we practiced the same hovering exercise, only now exposed to ocean swell. There wasn’t a tremendous amount of energy in the ocean, but there was enough to make a difference; requiring some control, and revealing small ramps here and there to get used to moving on.

We headed in through a narrow passage for lunch.

After lunch, we practiced a variety of draw strokes: moving abeam, draws on the move, forwards and backwards. Then, freshly sated and full of practice, we paddled back the way we came, seeing the water a bit lower, and with a bit more confidence in trying out emerging features.

On Day 3, we were hoping for surf conditions. We’d been told of a good beach to use, and the forecast conditions looked barely good enough. However, as we had to pack in the morning, we got a late start, and then learned that we could only launch from a beach we couldn’t park at, and park at a beach we couldn’t launch at. Then, the wind blew out the swell from being easily surfable.

However, we saw plenty of offshore rocks getting swell washed over, and that turned out to be great fun, adding more horizontal movement to what we’d tried before.

One feature we found was a pair of slots divided by a large rock. The easy way was to go left (right in the picture) for deeper, unobstructed water. The harder way was to the right (left in the picture), as it required turning a bit to avoid riding into a larger rock.

Everyone chose the hard way.

Sometimes it didn’t work out. Nothing the next swell couldn’t fix.

Some people just relaxed, getting comfortable on the waves.

Our day ended a little earlier, as most of the group was heading home that night. I’d elected to stay an extra night with one other person, to drive back in non-weekend traffic. As it turned out, I wouldn’t be driving back at all.

My car is almost eighteen years old. Here it is in full paddle wagon glory:

However, after we got the boats loaded on the car and trailer, and all the gear stowed, and had said our goodbyes, I maneuvered my car to hit to the wagon. When I went to make and adjustment, the car lurched and failed to turn over. After some fiddling about, I realized something was drastically wrong with the clutch. I’d have to call for a tow service.

I’d also have to figure out the trailer. Fortunately Mister Cowgirl was on his way back from his own weekend activities, and he drove out with his car to stay overnight and tow the trailer back the next day. Things were a little more complicated as we got the car moved from one garage to another. For now, my car is awaiting a full assessment, and will be convalescing in Rhode Island for a while.

Fortunately, that happened at the end of the paddle adventure. It’s inconvenient but could have been moreso. This was a great trip, for myself and the students, as well as for my club.