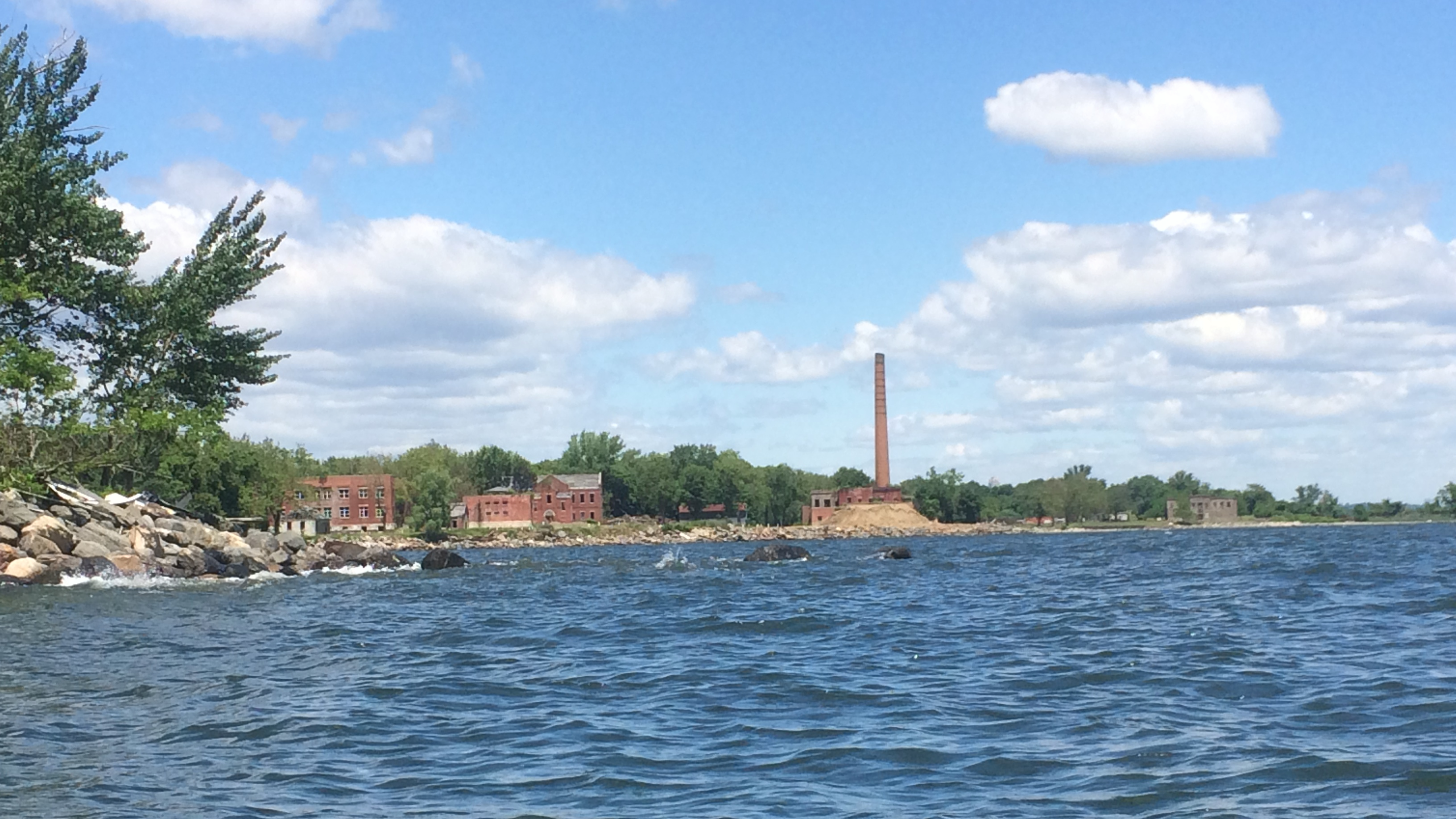 I’ve written lately about how sometimes paddling is about effort, and not distance. In this case, it was a bit of both.

I usually kick off my warm weather paddling with a long solo trip. I’ve also had a mind to build up to a trip that a friend of mine did a long time ago. Having paddled from Inwood to the Throgs Neck Bridge a few times (here, here, and here), I thought I might like to take a shot at paddling to Hart Island and back.

This was probably unwise. Ultimately, the roundtrip distance was thirty-six statute miles, and the city was still technically “on pause” for coronavirus, and protests sparked by the killing of George Floyd in Minneapolis continued. My trip would pass three islands in particular that connected these recent events, which is something I am posting separately, as they deserve attention on their own.

I checked the tides, and based on the weather pushed my plans from Saturday to Sunday. It was a good thing too – otherwise genial weather was broken mid-afternoon by thundershowers, about the time I would have been in the middle of the upper East River.

The basic trip goes like this: North from the Inwood Canoe Club to Spuyten Duyvil, south with the flood of the Harlem, through the Bronx Kill at Randalls Island, then out along the upper East River to the Throgs Neck. From there, it would be about a three mile open crossing to the southern tip of Hart Island, up a mile and back down a mile, before heading back the way I came.

One of my first waypoints was the 207th Street MTA station, which had a lot of barges around it. Basically all those tubes are new seawall to prevent flooding. This station, which is a terminal for the A and C trains in northern Manhattan, flooded during superstorm Sandy.

As it happens, apparently John F. Kennedy’s old PT boat was recently found in the muck nearby. Possibly. Who knew? Though not everyone agrees this is JFK’s boat.

I’ve gotten pretty good about planning the tidal currents of the Harlem. I had plenty of current assisting me, and it only took about an hour and a half to arrive at the northwestern corner of Randalls Island, in front of the RFK Jr (ahem, Triborough) bridge.

The Bronx Kill is a narrow creek separating Randalls Island from the Bronx. It’s tidal, both in terms of current and height. I knew that at low tides it required portage, but in my usual timing for the Throgs Neck, it’s passable.

Well, to get out to Hart Island I was about an hour earlier than usual, so hard “nope” from Mother Nature. I had two portages.

The first was easy, climbing out over slippery rocks covered in kelp and dragging my boat over. I’m almost willing to prefer kelp-covered rock over a wooden deck in terms of what I’ll drag a fiberglass boat on.

My second portage was at my favorite view from the water. Further down the kill there is a pedestrian bridge connecting Randalls Island the the Bronx. People walk, jog, bike, maybe run over it.

While the view was nice, it also marked another low point in the kill, followed by a long mud flat out to the mouth. Here, I had no kelp. After exiting my boat and scouting a bit, I shouldered my boat about fifteen yards, then set it in a shallow pool of water to walk a bit further, and then dragged it across some deep, dank mud quite a ways. There were a couple of times I thought I might need to hold onto my boat just to keep from sinking too far into the mud.

Once I was back in the boat, floating on the water, I dangled my feet out to wash as much of the mud off my feet and calves as I could.

North Brother Island was a quarantine hospital. Notably, it’s where Typhoid Mary was locked away, and is also where the General Slocum careened to a halt after catching fire passing through Hell Gate in 1905; over a thousand people died. It’s uninhabited today, and is off-limits as a bird sanctuary.

You can see some shoaling as the water from Hell Gate rushes northward and bends east around the island. I don’t know what that ship was for, but it was still there on my way back.

Once I’d rounded North Brother, I kept to the right of the channel and passed Rikers Island very soon after. You may have heard of it. The city announced plans to close it in a few years.

After Rikers, I passed the Whitestone Bridge, and then onwards to the Throgs Neck Bridge. The latter is the gateway to Long Island Sound; the water widens and turns left a bit, to the northeast.

It’s also the home of the State University of New York (SUNY) Maritime campus, a school primarily primarily for Naval ROTC and aspiring merchant mariners. Their ship, the Empire State, was tied up.

Across the way, at Kings Point, Long Island, is the US Merchant Marine academy.

If you want to learn to be a mariner, this area’s not a bad place to start.

By this point, things had been going well. I was considerably ahead of schedule, despite the portages. I was very pleased and ready to press on to Hart Island. After all, it was right in front of me.

Here’s a hint. There’s a tall smokestack in the middle.

However, nature had other plans.

Earlier, when I’d listened to the synoptic on the radio, the offshore marine forecast had predicted wind gusts in the F5/F6 range. I figured that was out at sea, and that while it might be perky in the sound, it wouldn’t be quite so strong. Meanwhile, while there’d been a steady wind from the north on the way out, it hadn’t been anything I couldn’t counter with some paddling and some strategizing. If anything, to this point the entire trip had been quite enjoyable.

I wouldn’t say I had F6 winds, but there were three sustained gusts in that crossing that were fully in the top end of F4 minimum, and one that was sustained F5. Sometimes it was in my face, which is fine if somewhat demoralizing, because while it can feel like no progress is being made, at least it isn’t cocking my boat.

However, I wanted to make sure I stayed out of the shipping channel, and most of the time the wind was from the NNW, which would push me directly into it. I ended up having to ferry against the wind quite a bit, which meant that I paddled a longer time and overall distance than my original plans.

It took me nearly ninety minutes to make that three-mile crossing, and by the end I was tired and, furthermore, had lost all that extra time and more. I wouldn’t be able to circumnavigate Hart Island without fighting current at the end of my journey, and on top of that the city had a curfew that I would come close to breaking if I returned much later than expected. (As it happened, the curfew was lifted about half an hour before I got back).

There was a small boat with a man and a woman fishing in it. I asked how it was going; not great, he said. I said he was in a great spot and he said yes, they were staying out of that ferocious wind.

“You were my beacon,” I said. His anchored boat had been a fixed object I could focus on, as I fought the wind.

I rested. Holy Hannah, I rested. I ate and sipped and stretched. Hart Island is also verboten, however, being used as the city’s cemetery for the unclaimed and indigent; prisoners from Rikers bury the dead, and the island is controlled by the Department of Corrections. All my resting, I did in my boat, on the water.

I contemplated paddling around the island, but I didn’t want to fight the wind anymore, and I knew I was out of time. Once I was ready, I turned around and worked out a return course.

I decided to swing by Stepping Stones lighthouse, so I paddled downwind a bit to the channel. There was quite a bit more boating activity than I’d seen in the Hudson or Harlem, so I was extra-vigilant before crossing. I waited for a barge heading east to pass, then made my move.

I was able to get much closer than usual to this Cormorant. Supposedly animals in general have gotten used to less human activity during the pandemic lockdown, so maybe this one was just more at ease with an eighteen-foot black and white log floating nearby.

It was time for the long journey back. I had a bit more to eat, some more water, then started my journey: past the Throgs Neck, past the Whitestone, and into the kill again. I took more breaks, but there was nothing like that crossing to Hart as I made my way back.

Here is the site of my first portage, about seven hours later in the tidal cycle.

Of course, the Harlem flows northish-southish, and that wind from the NNW hadn’t entirely gone away. While I had current with me, the two hours or so of wind to the face was pretty constant. I just kept telling myself I was making progress, looking at fixed objects to make sure that was true.

Eventually I was near home, coming around the bend to Spuyten Duyvil.

The remainder of the trip was uneventful. I passed under the Henry Hudson Bridge and the Spuyten Duyvil Bridge, then another mile or so with the Hudson’s ebb back to the boathouse. Many people were out in the park, enjoying the weather; a few waved from shore.

When I got back, there was one other club member getting ready to go out for a bit of a workout in one of our racing boats. We chatted a bit, then I peeled out of my paddling clothes and started laboriously rinsing and putting things away. I walked out with another member, chatting a bit, then went home.